In a massive political development in Maharashtra, senior Minister Eknath Shinde and multiple other Shiv Sena MLAs rebelled against the party over its stance on Hindutva and its alliance with Congress and NCP. While they were initially holed up in a 5-star hotel at Surat, they moved to Guwahati on Wednesday morning. Maharashtra CM Uddhav Thackeray will chair a key meeting of the Cabinet today. 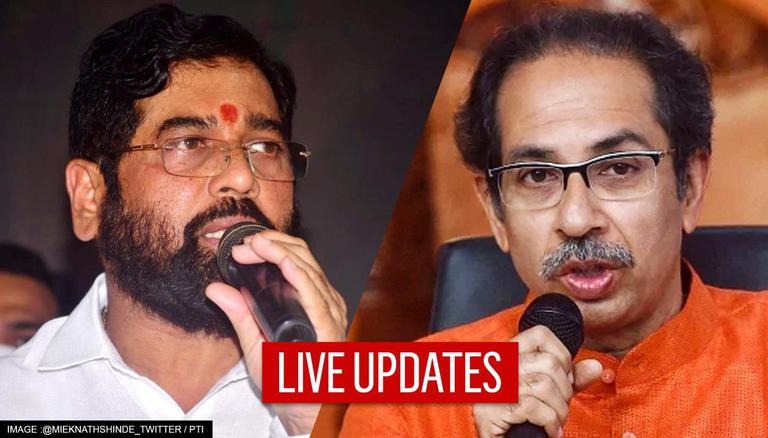 Two charter flights have been booked for Guwahati to take MLAs who have decided to side with Eknath Shinde and company, say sources.

Two-third of 55, i.e., 37 MLAs are needed to get an exemption against the anti-defection law. At present, 34 MLAs, including Eknath Shinde are there. Three more- Gulabarao Patil, Yogesh Kadam, and Mangesh Kudalkar--will join, taking the number to 36, one short of the set number to get exemption from the law.

Uddhav Thackeray's loyalist MLAs staying at St Regis Hotel in Mumbai were asked to leave the hotel, and go home, Republic learned through sources in the Shiv Sena.

The Thackeray family packed their bags and left the CM's official residence the Varsha Bungalow. While leaving, Uddhav Thackeray waved to the cameras. 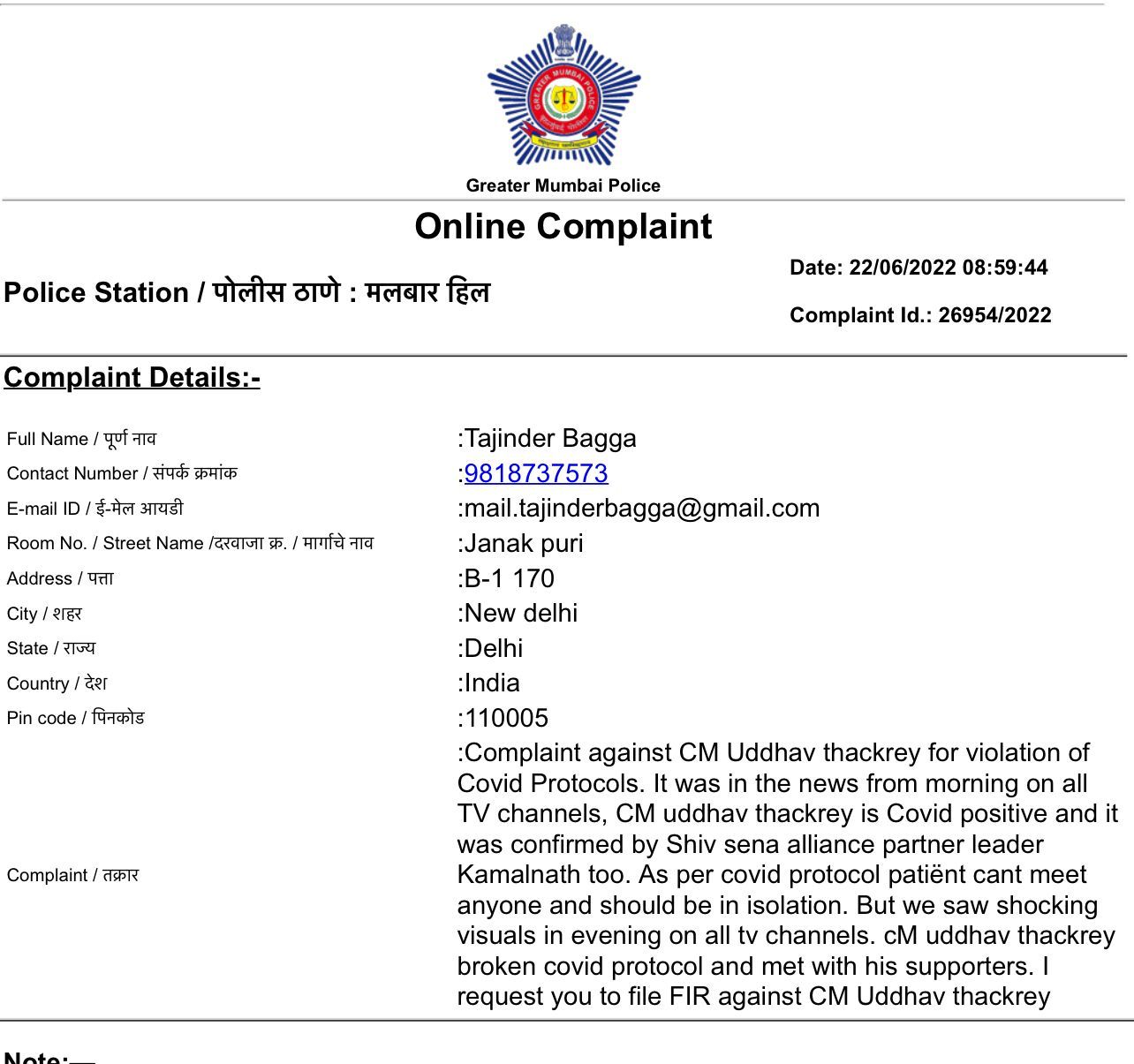 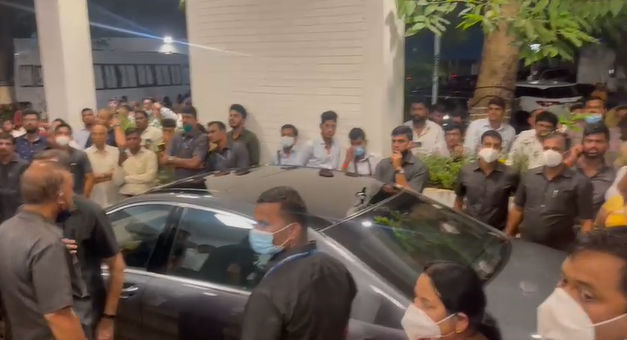 Minutes after speculations started doing the rounds that Uddhav Thackeray would be moving to Matoshree, Republic accessed pictures of luggage being taken out from the CM's official residence. 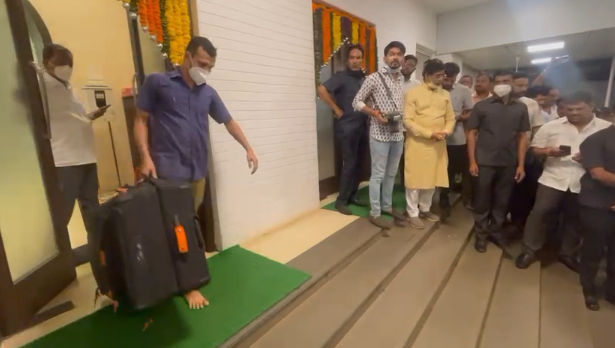 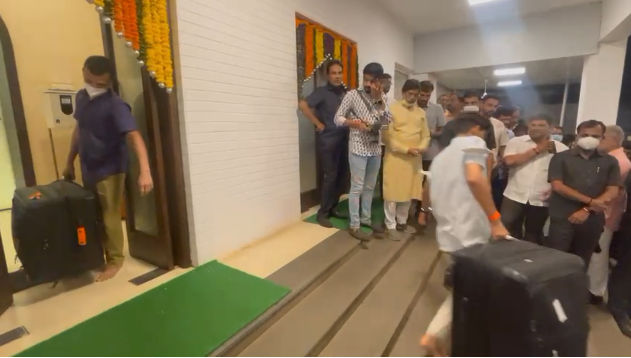 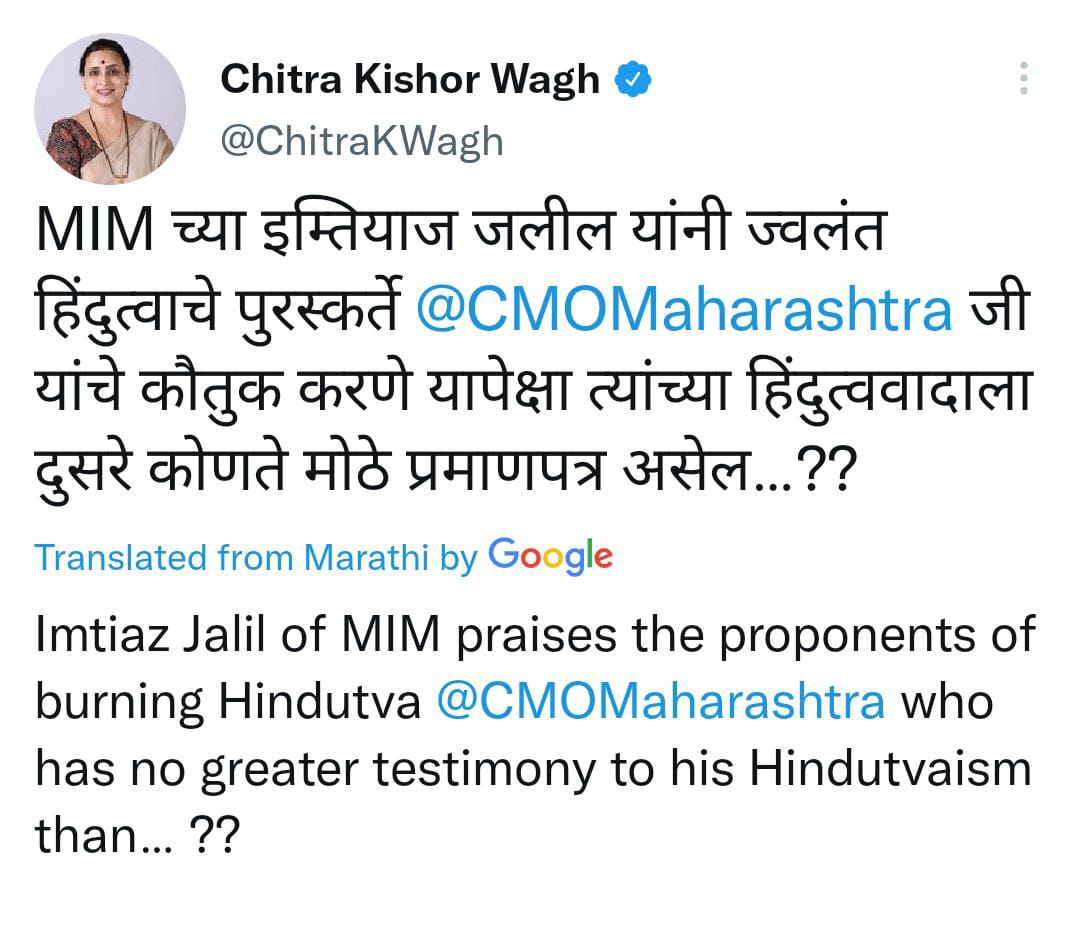 After meeting Uddhav Thackeray at his official residence, Varsha Bungalow, Shiv Sena MP Sanjay Raut left. While Raut was leaving, in a statement to the media, he said, "CM won't resign". 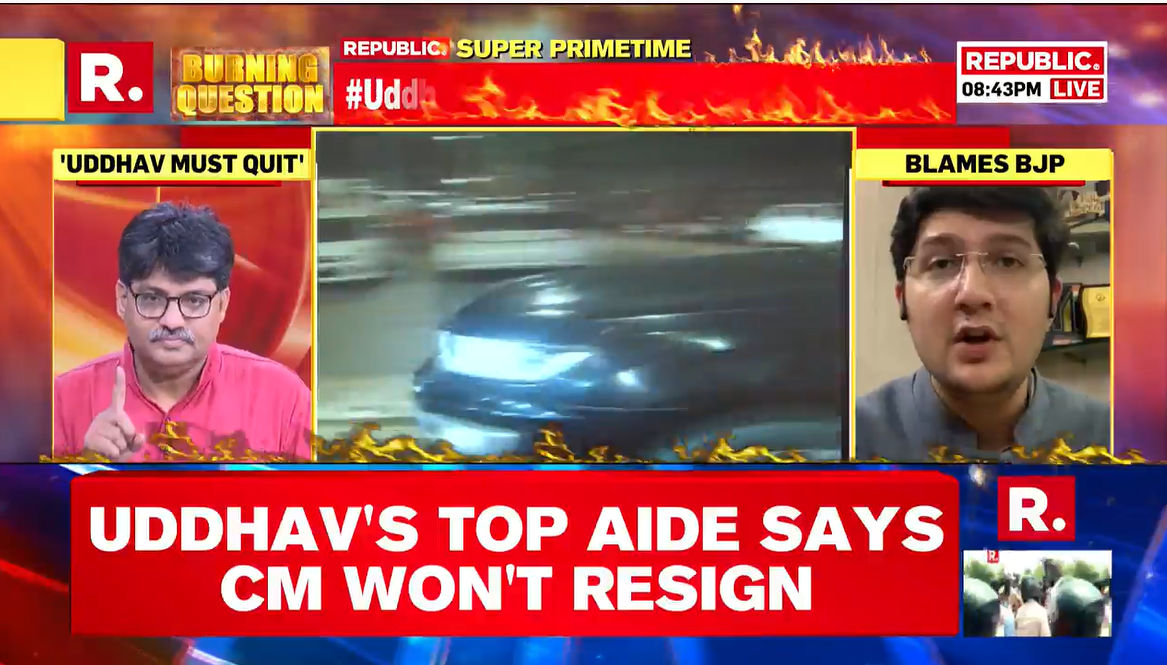 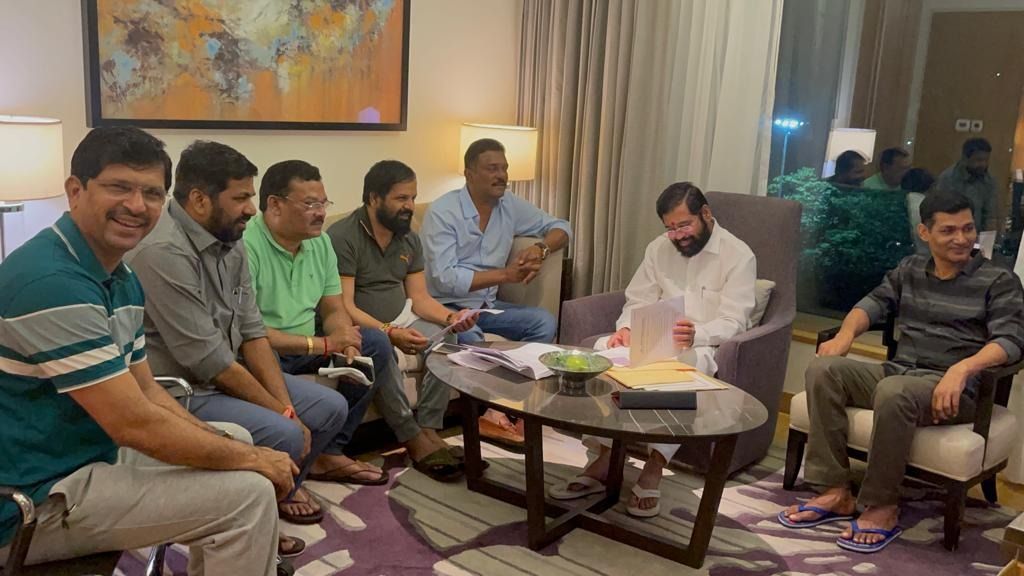 #LIVE on #UddhavInCrisis | Massive drama outside Uddhav Thackeray's residence as he is set to vacate CM bungalow; tune in for visuals here - https://t.co/xLratI11FM pic.twitter.com/kttxMazqfi

After meeting with Sharad Pawar, Uddhav Thackeray is planning to vacate his official residence, the Varsha Bungalow in Mumbai soon. From there, he would head to Matoshree, the residence of the Thackerays, informed Sources.

#UddhavInCrisis | Uddhav Thackeray to vacate the CM Bungalow and move to 'Matoshree'; tune in for #LIVE updates here - https://t.co/xLratI11FM pic.twitter.com/4y6vNn7VUB

Leaving Devendra Fadnavis' residence after a meeting, the BJP MLAs cleared that they have not spoken to rebel Eknath Shinde. Outlining that there is always an internal tussle going on in the Shiv Sena, BJP's Raosaheb Danve said, " The government will topple on its own...We are on wait-and-watch mode."

Leaving Devendra Fadnavis' residence after a meeting, the BJP MLAs cleared that they have not spoken to rebel Eknath Shinde. Outlining that there is always an internal tussle going on in the Shiv Sena, BJP's Raosaheb Danve said, " The government will topple on its own...We are on wait-and-watch mode."

The meeting between Maharashtra CM Uddhav Thackeray, NCP chief Sharad Pawar, and party MP Supriya Sule concluded at Varsha Bungalow in Mumbai. COVID-positive Thackeray came out to see off Pawar and Sule and even greeted the media. 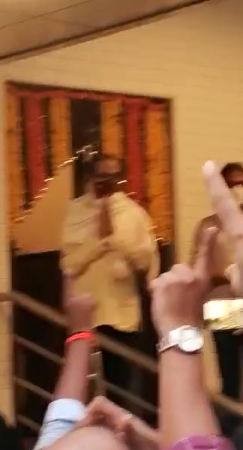 Maharashtra Congress chief Nana Patole voiced his support for Chief Minister, and Shiv Sena supremo in a tweet. "Hon'ble Uddhav Thackeray, every activist of the Indian National Congress Party is with you in this anti-constitution and anti-national politics of Bharatiya Janata Party!" he wrote.

Republic learned that at the Varsh Bungalow, Maharashtra CM Uddhav Thackeray is discussing with NCP supremo Sharad Pawar ways to pacify Eknath Shinde and other rebellions. Discussions are also taking place about giving Shinde the CM post, and reshuffling the cabinet.

#UddhavInCrisis | In a meeting held between Sharad Pawar and CM Uddhav Thackeray, discussion on Shinde as CM: Sources. Tune in to watch here - https://t.co/xLratI11FM pic.twitter.com/GEElR73OYs

Republic learned that NCP supremo Sharad Pawar has urged Maharashtra Chief Minister Uddhav Thackeray to give the post to Eknath Shinde. Thackeray may move out of the Chief Minister's official residence soon. 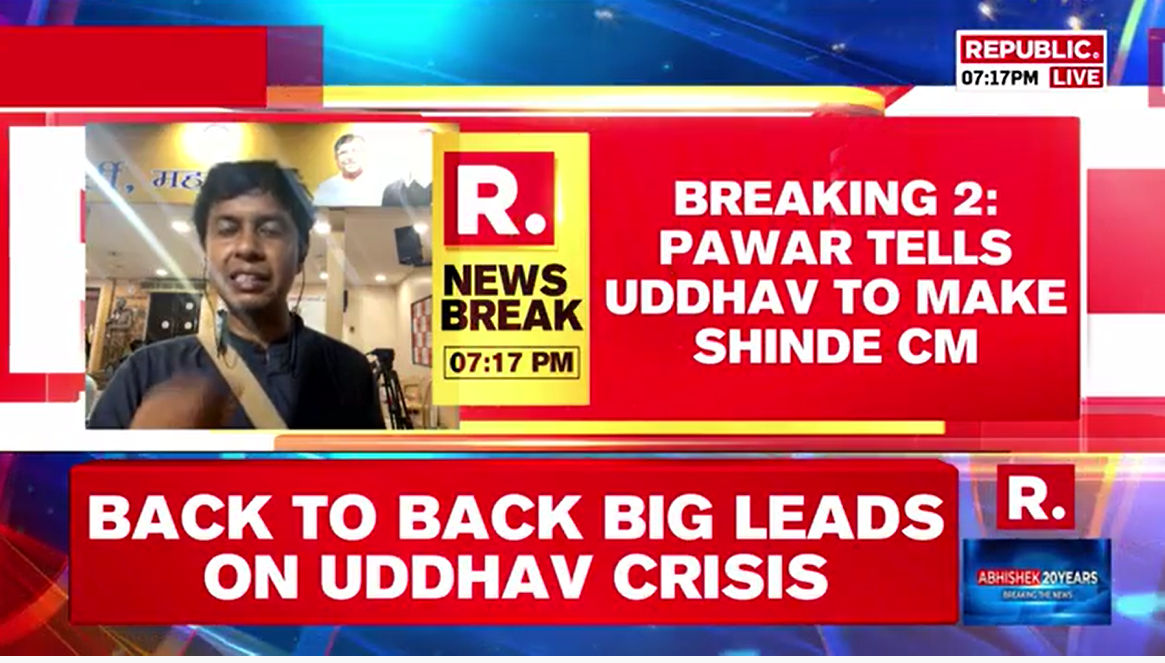 Eknath Shinde's supporters hit the streets in Maharashtra's Thane. Speaking to the media, one of the supporters said, "Shinde Saheb is equivalent to God for us...He provided us with hospitals and other neccessities...He never focused on anything other than public service."

While talking about the political instability that has erupted in Maharashtra, BJP's Uma Bharti called Shiv Sena a 'rotten fruit'. The former Union Minister highlighted that it is not Balasaheb's Shiv Sena and said, "When the alliance of NCP, Shiv Sena, and Congress falls in Maharashtra, the BJP will have to come forward to take care of the people."

After the elaborate Facebook Live, Uddhav Thackeray has found a supporter in AIMIM. MP from the Hyderabad-based party, Imtiaz Jaleel appreciated the 'truthfulness' of the Maharashtra CM. "We may have political/ideological differences with Shiv
Sena but after hearing Mr Uddhav Thackeray today my respect for him has simply grown. Your politeness gave a tight slap to all the dissenters within your party," Jaleel wrote on Twitter.

Appreciate the truthfulness of @CMOMaharashtra. We may have political/ideological differences with @ShivSena but after hearing Mr Uddhav Thackeray today my respect for him has simply grown. Your politeness gave a tight slap to all the dissenters within your party. @AUThackeray

Cornered by his own party men and dwindling numbers, Maharashtra Chief Minister Uddhav Thackeray on Wednesday conceded his defeat and said that he is 'ready to resign' from his post. Delivering an impassioned address via a Facebook live, Uddhav Thackeray expressed his dismay over his 'own people' turning against him and stated that he is ready to tender his resignation on one condition - that his fellow Shiv Sainiks face him and make the demand in person.

"We were in Opposition to the Congress and NCP for 25-30 years. But I am grateful that both Congress and NCP are supporting me today, they are saying we will stand by you. But it's my own people working with me for ages that are now questioning me. I am ready to resign as the Chief Minister and as the Shiv Sena chief if my own MLAs want it," proclaimed the CM.

On Maharashtra's political turmoil, Congress' KC Venugopal said, "It's an internal issue of Shiv Sena and the party leadership can sort it out easily. The problem is the BJP's attitude of using money and agencies to poach the MLAs. I think Shiv Sena will survive." 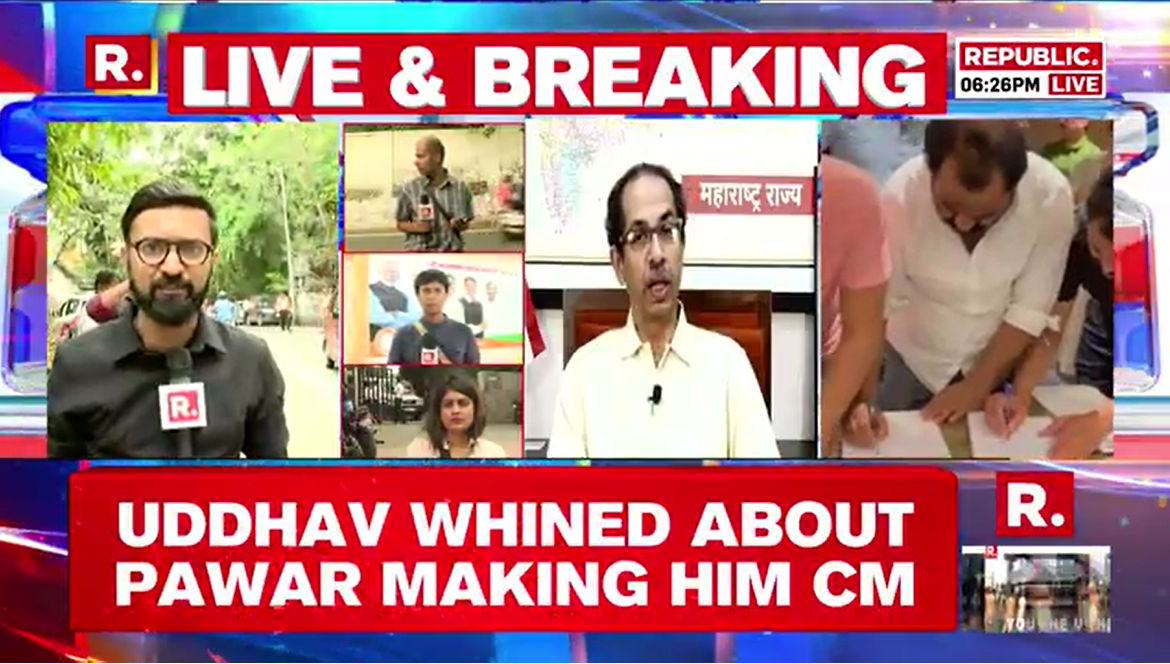 With Maharashtra MLAs confined to a hotel in BJP-ruled Assam, the Leader of Opposition in the northeastern state Debabrata Saikia termed the state of affairs as 'unfortunate'. "Leaders are not allowed to come in cotact and talk to the media...Assam never witnessed a situation of this sort before," he said.