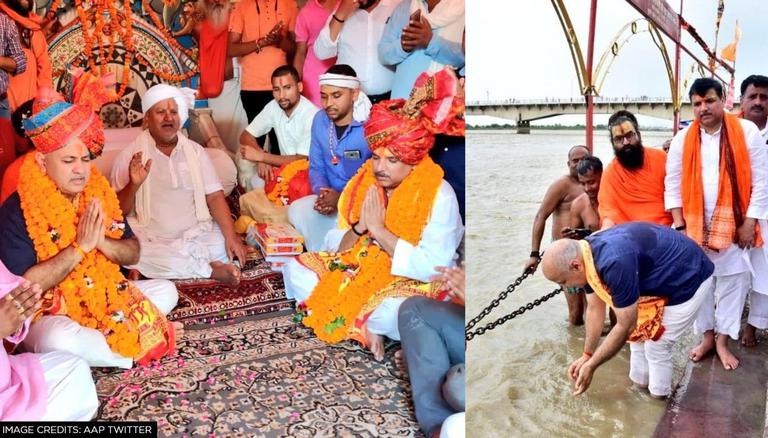 
Vowing to establish 'Ram Rajya' in Ayodhya, Delhi Dy CM Manish Sisodia and AAP MP Sanjay Singh on Monday, visited the Ram Lalla shrine seeking his blessings before kicking off AAP's UP campaign. The AAP leaders recited the Hanuman chalisa at the Rasik Peeth in Ayodhya, before launching AAP's tiranga rally. AAP has promised to provide 'world-class education, health facilities, farmers' rights and jobs to youth. The 403-seat UP Assembly where Yogi rules with an iron-clad majority of 314 seats, is up for grabs in February 2022.

"The 'Ram Rajya' is still the highest inspiration of happy and clean governance and administration in the whole world," claimed AAP.  Sisodia also expressed his joy at being welcomed by saints' 'Vijayi Bhav' slogans, vowing to establish an AAP govt in UP. Sisodia will lead a 'Tiranga Sankalp Yatra' in Ayodhya from Gulab Badi to Gandhi Park today.

While AAP has not announced any alliance, its UP in-charge Sanjay Singh met with Samajwadi Party chief Akhilesh Yadav in July, hinting at an AAP-SP coalition for the UP polls in 2022. Downplaying the meeting, Singh claimed that he met the SP scion informally to share belated birthday wishes. SP has stated that it will not ally with any 'big' party, while AAP is already contesting elections in Gujarat, Uttarakhand, Punjab, Goa and UP.

AAP has already alleged that the Uttar Pradesh government has indulged in a big scam in the multi-crore Jal Jeevan Mission scheme in the state. Singh alleged that BJP minister Dr. Mahendra Singh had awarded the contract of constructing pipelines to a company that has been rejected by eight states. Moreover, the AAP MP alleged that the government tender had been awarded to the company at inflated rates - 40% higher than the original quotation.

READ | AAP to kick off UP poll campaign; Manish Sisodia to hold Tiranga rally in Ayodhya

Previously, Singh and SP's ex-MLA Pawan Pandey accused Ram Janmabhoomi Trust chief  Champat Rai of buying a piece of land worth Rs 2 crore at an inflated price of Rs 18.5 crore for the Ram temple premises with help from Trust's member Anil Mishra. Both the leaders alleged that Rai purchased the land, measuring 1.208 hectares and located in Bag Bjaisi village under Sadar tehsil of Ayodhya district for a price of Rs 18.50 crore from the first purchaser, who had bought it minutes earlier on March 18 this year from its original owners for a sum of Rs 2 crores.  Terming it a case of money laundering, Singh and Pandey sought a probe by the CBI and ED.