Former Congress president Rahul Gandhi sparked off a row on Wednesday as he posted a distorted map of India while highlighting the threat of coronavirus.

Former Congress president Rahul Gandhi sparked off a row on Wednesday as he wrote a Twitter post about Coronavirus. BJP IT in-charge Amit Malviya pointed out that Gandhi’s post contained a world map that incorrectly depicted India’s official boundaries. The map which claims that the coronavirus infection has spread all over India has portrayed Pakistan-occupied Kashmir (PoK) as a part of Pakistan. After the backlash, Gandhi removed the image and replaced it with an article from the Harvard Gazette.

Why would you repeatedly use a map which shows a mutilated J&K? https://t.co/1sstfl22Or

This is Rahul Gandhi's deleted tweet containing the wrong map of J&K: 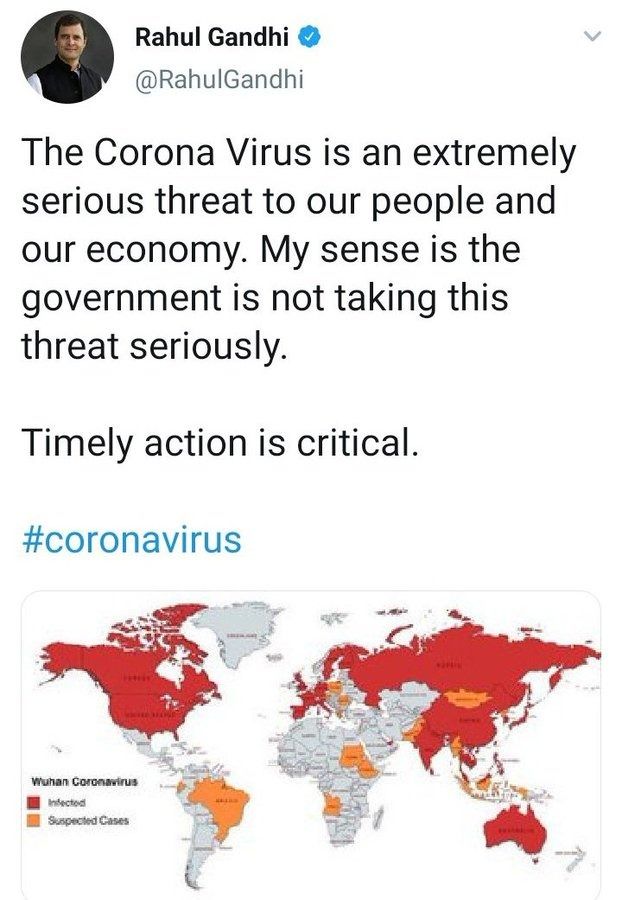 Earlier, the Lok Sabha MP from Wayanad broke his silence on the coronavirus crisis grappling the world. Terming it as an “extremely serious threat”, Gandhi contended that it had consequences for the Indian economy as well. Moreover, he accused the Centre of adopting a lackadaisical attitude in this regard.

The Corona Virus is an extremely serious threat to our people and our economy. My sense is the government is not taking this threat seriously.

Instances of the distorted map in the past

Incidentally, this is not the first time that Congress has been accused of distorting the official map of India. In December 2019, Lok Sabha MP Shashi Tharoor had shared a poster confirming his participation in a rally in Kozhikode against the Citizenship Amendment Act and the National Register of Citizens. However, the map in the poster contained a mutilated J&K.

Subsequently, he issued an apology in this regard. In 2017, a Congress booklet published on the failures of the Narendra Modi government referred to J&K as “Indian occupied Kashmir”. Later, party leader Ajay Maken clarified that it was a printing mistake.

Recently, a parliamentarian from Malviya’s party was also embroiled in a similar controversy. BJP Lok Sabha MP Shobha Karandlaje addressed a pro-CAA rally in Chikmagalur, Karnataka on January 17, 2020. The poster on the stage included PoK in the territory of Pakistan.

Read: Tejashwi Yadav Does Not Back Rahul Gandhi's 'danda' Comment, Says 'Talk About Pen Instead'