Amid reports of internal tussle within the Maha Aghadi over the recent cabinet expansion, a sensational development has taken place in Maharashtra's Palghar. Reportedly, BJP workers in Palghar has put a banner with picture of MNS leader Raj Thackeray alongside Prime Minister Narendra Modi, former chief minister Devendra Fadnavis, and other local leaders. The banner has reportedly been put as a part of campaign for the upcoming Zilla Parishad polls in Palghar and suggests that the BJP can ally with Raj Thackeray's MNS in the local body elections.

This comes after the fallout of Shiv Sena and the BJP. As per sources, BJP leader Ashish Shelar had met Raj Thackeray after its fallout with the Uddhav Thackeray-led Sena. Earlier on Saturday, sources reported that Raj is expected to adopt Sena's Hindutva ideology on January 23 with Sena going soft Hindutva, after allying with Congress and the NCP. However, back in December, the MNS leader had spoken against the BJP-led Central government's Citizenship Amendment Act. He had said that it is an attempt to distract the attention from the economic crisis in the country. 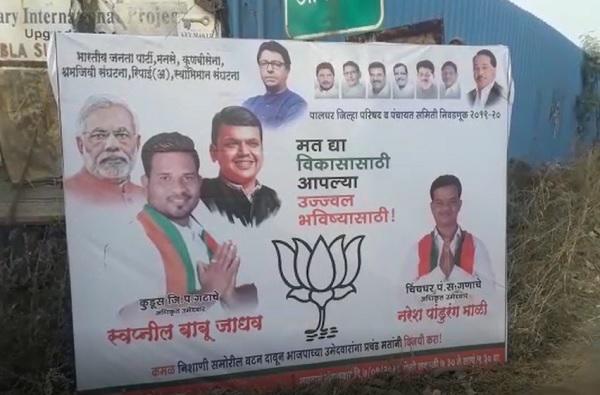 Almost a month after elections, the president's rule was imposed after no party could prove a majority. The BJP-Sena which fell out squabbling over a 50-50 power-sharing and shared CM post bagged 161 seats (BJP- 105, Shiv Sena-56). Meanwhile, the Maha Aghadi won 98 seats (NCP -54, Congress) and chose to ally with Shiv Sena, forming the Maha Vikas Aghadi. This was preceded by 4-day CM stint by Fadnavis, which fell after Ajit Pawar rescinded his support after the Supreme Court ordered an open ballot floor test in the Maharashtra Assembly immediately. However, both Pawar and Fadnais resigned and Uddhav Thackeray was sworn in as the chief minister of Maharashtra on November 28 along with six ministers — two each from alliance partners the Shiv Sena, NCP, and Congress.