Defence Minister Rajnath Singh on Saturday praised Prime Minister Narendra Modi for being rated as the most popular head of Government by an American research firm. Rajnath Singh called it a proud moment for the country while stating that PM Modi has been praised for his leadership during the pandemic.

The popularity and credibility of PM Shri @narendramodi has been recognised globally. According Morning Consult, a data firm, his approval rating is the highest among the world leaders. He has been praised for his leadership during the Pandemic. Indeed a proud moment for India!

Morning Consult, an American research firm which carries out surveys and researches globally said in its latest survey that over 75% people approve of Modi while 20% disapprove, making the net approval ratings of PM Modi at 55%, which is said to be the highest among the world leaders. Approval ratings are based on a seven-day moving average of adult residents in each country, and samples sizes vary by country.

BJP National President JP Nadda too hailed the prime minister for having earned the trust of the people of the country. He took to Twitter to state that PM has yet again emerged the most popular head of Government for his efficient handling of various issues and management of the COVID-19 crisis. 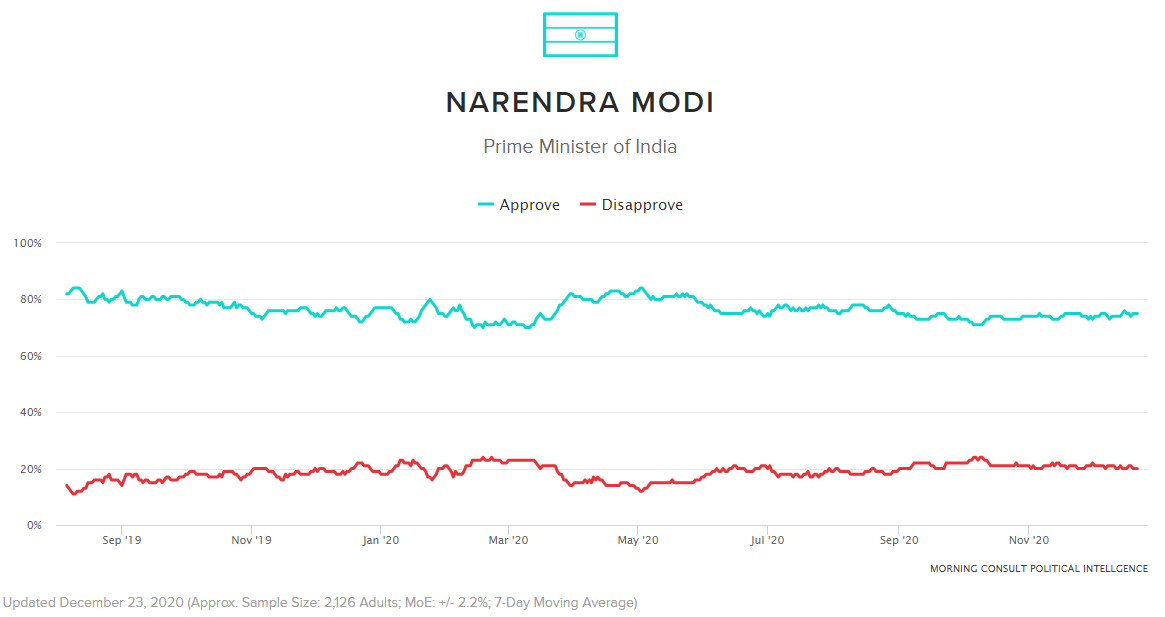 Observations of the research

The blue line in the above snip depicts the approval rating for PM Modi while the red one shows his disapproval rating, making the net approval rating stand at 55%. The other leaders who have witnessed a rise in their popularity include Mexico's President Andres Manuel Lopez Obrador and Australian Prime Minister Scott Morrison.

After laying the foundation stone for AIIMS at Gujarat's Rajkot, the prime minister said India is preparing to run the world's largest Covid-19 vaccination drive.

He urged the people not let their guard down and strictly abide by preventive measures against coronavirus even after the vaccines are launched. The prime minister also gave a new mantra of Davai bhi, kadaai bhi (medicines as well as caution) while recalling his previous mantra.

"I used to say 'jab tak davai nahi dhilai nahi' but now our mantra for 2021 should be: Davai bhi, kadaai bhi (yes to medicine and yes to caution)," PM Modi said while adding, "The numbers of new cases of Covid-19 infection in the country are decreasing now. We are preparing to run the world's largest vaccination program in the next year."