Amid the ongoing standoff between India and China at the LAC, former Defence Minister AK Antony attacked PM Modi and said that Galwan Valley was never disputed.

Amid the ongoing standoff between India and China at the LAC in which disengagement has just taken place, Congress leader and former Defence Minister AK Antony while addressing a press conference on February 14 hit out at Prime Minister Narendra Modi and said that for the first time, India is facing two-front war-like-situation. Speaking further, the former Defence Minister said, earlier it was only Pakistan but now China is also becoming more belligerent by building infrastructure and military mobilisation across India-China border mainly from Eastern Ladakh, Arunachal and Sikkim.

While stating that Galwan Valley area was never a disputed point, not even in 1962, AK Antony said that this disengagement is the surrender of our area. Speaking further at the press conference, he said, "Our armed forces used to patrol up to Finger 8, while the Chinese army used to patrol till Finger 4. Finger 4-8 was disputed, but our LAC was Finger 8. Now after disengagement, we have vacated Kailash range and this disengagement has happened at the cost of national security."

Coming out in support of the Congress leader, Randeep Surjewala hit out at the Central government and said that it has never happened in any governance before that the Indian Force came back beyond Figure 3.

Reacting to this, BJP leader Amit Malviya slammed the former Defence Minister and said, "This is how  AK Antony, Defence Minister in the UPA era, dealt with China!" Taking a fresh jibe at the Congress leader Rahul Gandhi, the BJP leader said that Rahul Gandhi need not go all the way back to Nehru because there are more recent instances of Congress' pusillanimity when it comes to dealing with China. "He has the temerity to lecture us," Amit Malviya added. 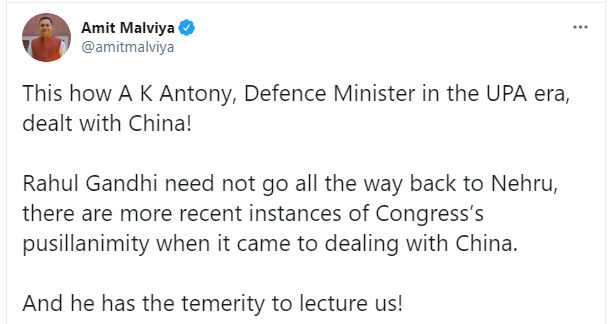 Rajnath Singh in LS: 'Not one inch lost'

Defence Minister Rajnath Singh briefed the Lok Sabha about the agreements between both nations. Asserting that India has not allowed 'anyone to take an inch of land', he said that India will remain at their permanent base at Dhan Singh Thapa Post near Finger 3 and China at the North Bank area to the east of Finger 8, with similar action agreed to in the South Bank area. He said that there are still some outstanding issues with regard to deployment and patrolling at some other points along the LAC. India and China have also agreed to remove any structures that had been built by both sides since April 2020 in both the North and South Bank areas, restoring the landforms as per the status quo prior to it.

After formally agreeing to disengagement by India and the Chinese army at South Pangong Tso area, the Indian Army released a video of the disengagement process ongoing at LAC on Thursday. Visuals from the region show a formal meeting between the military commanders of both sides, agreeing to disengagement - shaking hands. Moreover, the Chinese Army's three heavy tanks are seen retreating from the area, while one Indian Army tank is also seen retreating from the area. India and China have held nine rounds of military-level talks before a breakthrough was found regarding de-escalation and disengagement at the LAC. 20 Indian Army soldiers including Commanding Officer were martyred when a violent faceoff took place in June 2020  while the de-escalation process was underway in the Galwan Valley.