The Vishwa Hindu Parishad on Friday came out in support of senior Congress leader Jairam Ramesh for his thrust on vegetarianism. VHP spokesperson Vinod Bansal mentioned that Ramesh had echoed a similar sentiment at the United Nations in 2009. Bansal quoted Ramesh as saying, “The solution to cut emissions is to stop eating beef”. Furthermore, he contended that both the cow as well as the country would have been safer had Congress and its allies listened to the advice of Ramesh. 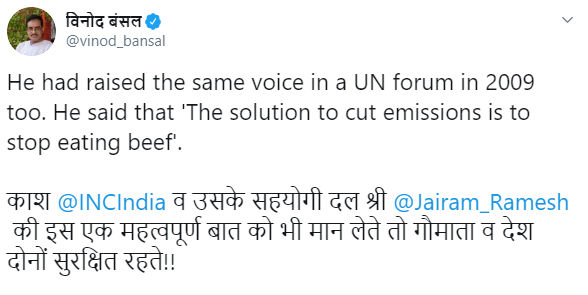 'The carbon footprint of a non-vegetarian diet is greater'

Participating in a discussion on the ecosystem of Western Ghats at the Krithi International Book Fair in Kochi on Wednesday, senior Congress leader Jairam Ramesh highlighted the importance of adopting a vegetarian lifestyle. He held the beef industry responsible for contributing to global warming. Ramesh buttressed his claim by mentioning that forests were being cut down in nations such as the US, Brazil, and Argentina to make room for the cattle. Citing studies showing the cattle link to greenhouse gas methane, Ramesh at the same time acknowledged that beef curry was an important component of a person’s diet in Kerala. However, he reiterated that the carbon footprint of a non-vegetarian diet was more than that of a vegetarian diet.

The Congress party is perceived to have adopted a conflicting stance on the issue of beef. While it was responsible for prohibiting cow slaughter in many states across the country, Congress has often opposed BJP’s stricter approach against beef possession and consumption. In 2017, youth Congress leaders publicly slaughtered a calf in Kerala to protest against the Centre’s move to ban the sale of cattle for slaughter. After facing the backlash of BJP, former Congress president Rahul Gandhi condemned the incident.