A few days ago, AC Milan's Zlatan Ibrahimovic commented on LeBron James, and how the Los Angeles Lakers star should stay away from voicing his political opinion. While Ibrahimovic explained his views, he had already been called out by fans and other athletes. Many James fans defended and supported the NBA icon, happy that he is using his platform to raise his voice against matters like inequality and police brutality. 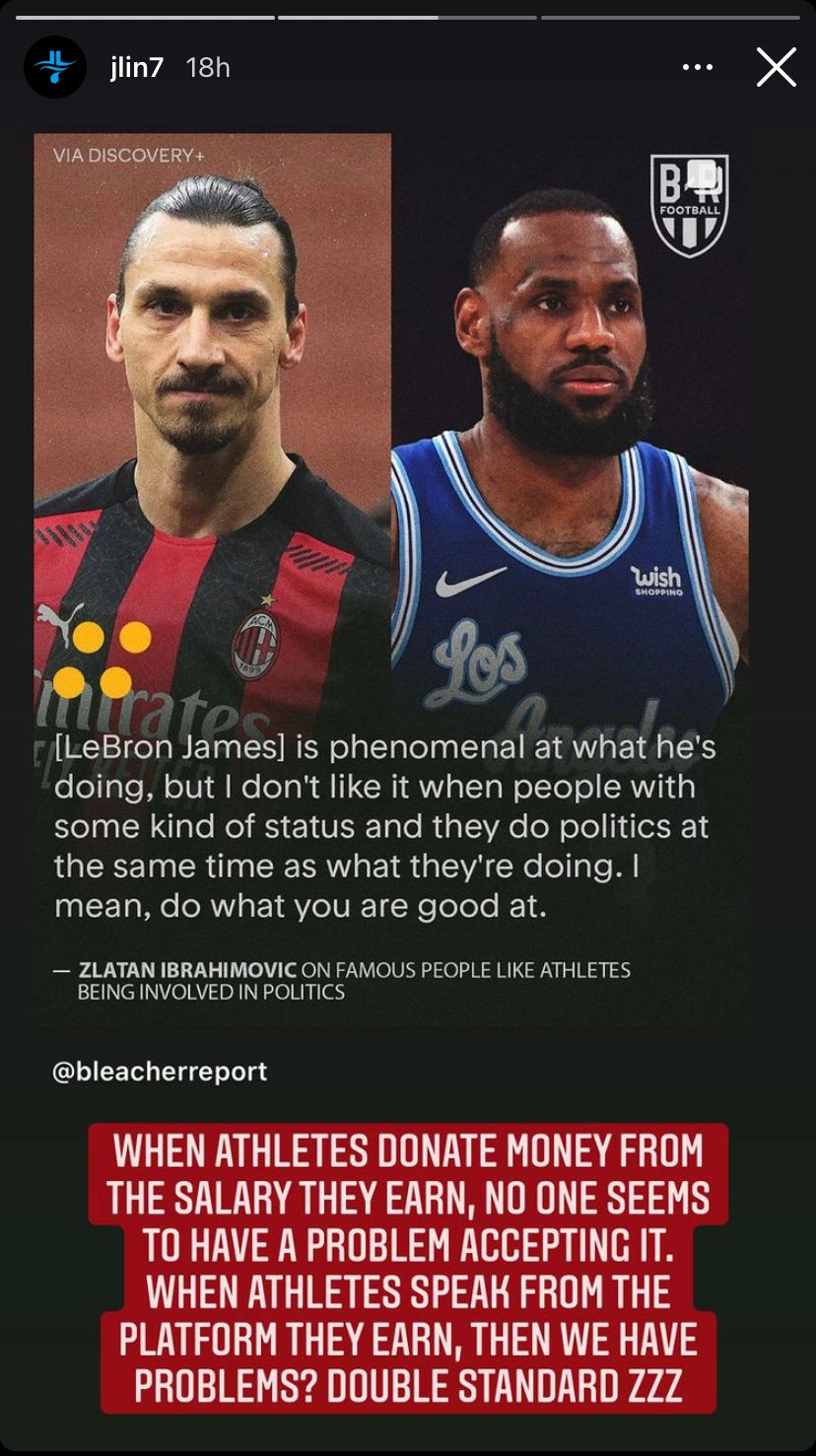 On his Instagram story, Jeremy Lin spoke about the Zlatan-James situation. As per the 32-year-old player (often speaking up on social and political issues), no one seems to complain about donations athletes make. However, according to Lin, when an athlete chooses to voice their opinion instead of shelling out money, people have a problem.

No, what divides humanity is dictators and authoritarians.
When athletes speak up,it’s not for fun or attention. It’s to hold these regimes accountable

When you are arrogant and have no empathy or sympathy & only care for yourself, you can tell people not to stand up for justice https://t.co/EmeChQOhvm

Enes Kanter chose to tweet about Zlatan's words. He explained that when an athlete speaks up, it is not for fun and attention, but for holding the regimes accountable. He further slammed Ibrahimovic for his comments, adding that only someone arrogant can tell people not to stand up for justice.

‘I don’t like when people, when they have some kind of status, and they do politics at the same time as what they are doing.’

While speaking to UEFA and Discovery+ Sweden, Ibrahimovic spoke about athletes in general, and how they should refrain from getting into political discussions. He went ahead and spoke about LeBron James and how an athlete should stay an athlete. "He’s phenomenal, but I don’t like when people with a ‘status’ speak about politics. Do what you’re good doing," he said.

LeBron responded after Zlatan Ibrahimovic criticized him for his activism.

“I’m kind of the wrong guy to actually go at because I do my homework.” pic.twitter.com/VyKgBrYuiz

James also responded to Ibrahimovic, stating that he will not stop speaking up on what matters. "There’s no way I would ever just stick to sports, because I understand this platform and how powerful my voice is," James said while talking to the reporters.

When James started playing, he seldom spoke about political issues. However, with Donald Trump being elected as president, James became increasingly vocal about issues surrounding the country. Last year, James and other NBA players took a strong stand against police brutality as the Black Lives Matter movement took over the nation.

James even worked on voting, starting More Than a Vote before the November elections. Fans have supported James, most of them looking forward to someone like him take a stand. However, the 'shut and dribble' narrative has also been spoken about often, extending to both NBA and WNBA players.