Brooklyn Nets star Kevin Durant was visibly upset after being pulled out of their game against the Toronto Raptors due to the NBA's health and safety protocols. 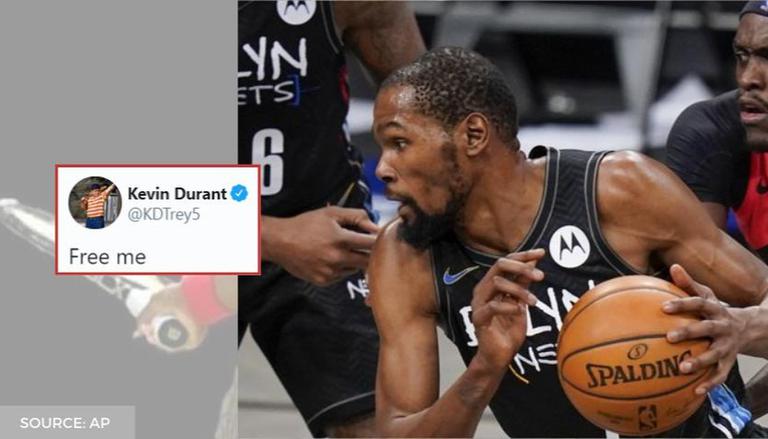 In what turned out to be a bizarre set of events, Kevin Durant was ultimately pulled out of the Toronto Raptors game on Friday (Saturday morning IST). The NBA 2020-21 season has seen many players being sidelined due to the same, often leading to games being pushed ahead as there were less than the number of required players. Durant, however, remained unimpressed and took to voice his disagreement on Twitter.

Kevin Durant injury: Why was KD pulled out vs Raptors

Durant was unable to start the game vs Raptors and was later unable to complete it due to the league's health and safety protocols. As first, Durant was not available to play against the Raptors, only to be cleared in the first quarter – making it his first appearance as a reserve in 867 games.

In a statement released, NBA spokesperson Tim Frank revealed that Durant had tested negative thrice in the past 24 hours. This also includes PCR tests. However, because someone Durant interacted with, had inconclusive results shortly before the game, Durant was pulled out while the result was looked at.

As per the NBA, KD was sidelined "out of an abundance of caution", something which Durant disagreed with.

Kevin Durant vs Raptors: KD upset with the NBA?

"Free me," Durant wrote soon after the game. The 32-year-old guard was visibly frustrated with the decision. Fans remained sympathetic towards the confusing set of events. Soon, people started blaming the league, many asking as to why other players were not pulled out with Durant. The two-time NBA champion coming in contact with others also puts everyone else at risk, many noted.

Durant quoted a tweet by Brian Floyd, who was asking why were terms like 'abundance of caution' used when it is a PR tactic. "Yo @nba, your fans aren’t dumb," Durant wrote, adding that no can be fooled with these "wack a**" PR stunts. He added the hashtag "FREE7" at the end.

This was Durant's first game against the Raptors since the 2019 Finals, when he was sidelined after rupturing his Achilles tendon.

With Durant sidelined, the Raptors ended up beating the Nets 123-117.

"It was confusing, frustrating, bizarre," said Joe Harris said about the situation, referring to Durant playing as a reserve and then not playing again. He added that the sequence of events did not make sense, but he does not "make the decisions". Harris had team-high 19 points.

Pascal Siakam led the Raptors with 33 points, 11 rebounds and 6 assists. Kyle Lowry added 30 points. Norman Powell, Chris Boucher and Fred VanVleet finished with 18, 17 and 11 points respectively. While the Nets made a comeback after a 17-point deficit, they could not overcome the Raptors without Durant – who is currently the league's No. 2 scorer.

James Harden and Kyrie Irving scored a combined 32 points, not able to propel the team to victory. "We gave up offensive rebounds and turned the ball over," Said head coach Steve Nash, adding that the Raptors found separation down the stretch.