Recently, Dwyane Wade posted a meme featuring Serena Williams about to smack his head with a racket, thinking his blond hair was a tennis ball. 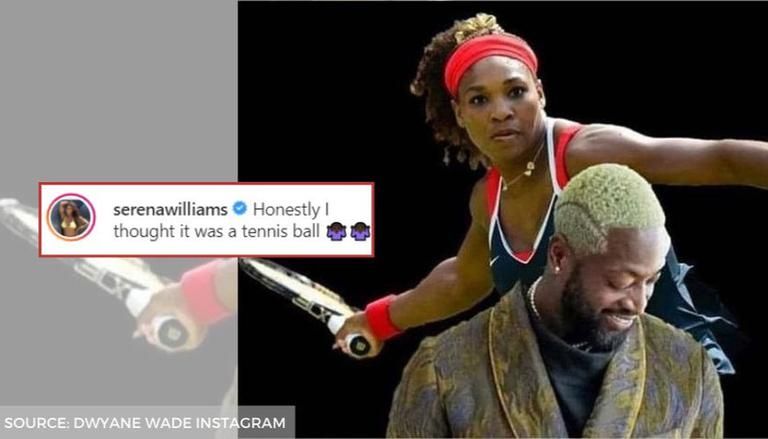 This quarantine, retired NBA icon Dwyane Wade has experimented with his hairstyle, having fans mock and appreciate his unique fashion sense. Earlier this year, he also went blond, which resulted in countless memes on the internet. One meme featured Serena Williams, who is about to hit Wade's head – which resembles a tennis ball. Wade shared the meme on Instagram, to which Williams reacted.

"Who did this?" Wade asked, adding a series of laughing emojis while tagging Williams. Fans seemed to love Wade's post, flooding his comment section with more jokes. Williams seemed to weigh in on the joke, saying, "Honestly I thought it was a tennis ball”.

Zaire Wade claims to be the culprit of this edit of Dwyane Wade and Serena Williams 😂 pic.twitter.com/vXgjdt3ZAk

Others react to the Dwyane Wade blonde hair

Apart from Williams, several celebrities chose to reply to Wade's hilarious meme. LA Lakers star and Wade's friend LeBron James was one of the first people to comment, simply adding a "yo", countless laughing emojis and a tennis racket. "I’m mad i don’t get credit for this," Zaire Wade wrote, possibly indicating that he was the one who made the edit.

Gabrielle Union responded with the word "dead", adding skulls, laughing at the hilarious meme. Deon Cole, Hassan Whiteside, Bradley Beal, Victor Oladipo and Udonis Haslem were some others who reacted on Instagram. "I need 30% of all profits made on this post," his daughter Zaya wrote, indicating that she was the one who sent him the meme in the first place.

The last time fans spoke about Wade's hair was in July, when he coloured his hair in flames. The hair was dyed at the back, providing contrast against Wade's dark hair. While it was supposed to be a tribute for his time with the Miami Heat, Wade and his hairstyle was compared to Dennis Rodman, who was known for his vibrant hair colour choices during his time in the league.

On the other hand, Serena Williams had to pull out of the season this year, having torn her Achilles tendon. She withdrew after her victory at Roland Garros, and had already hurt herself during the US Open. Williams, 39, is still aiming for her 24th Grand Slam, dismissing rumours of her retirement.

WE RECOMMEND
Maria Sharapova sizzles in 80's-style photoshoot for top fitness brand; see pictures
Serena Williams net worth and businesses: How much is the American tennis legend worth?
Serena Williams twins with daughter Olympia on IG in 2-year-old's top
Discovery Plus releases 'Being Serena'- 5-episode docu series on the Former World No. 1
Kenin voted WTA Player of Year; Azarenka gets Comeback honor