Skipper Rohit Sharma (28) and KL Rahul (28) were outstanding in the Powerplay while Virat Kohli (60) gave glimpses of his vintage self by playing one of his most sublime knocks in recent times to take India to a more than respectable total. 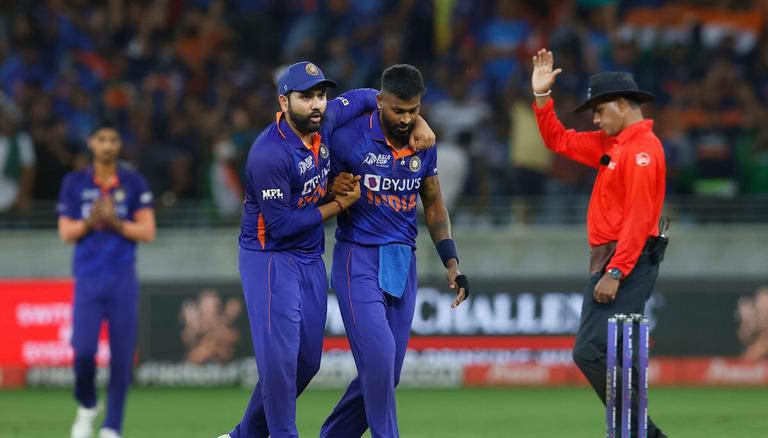 
A tactically superior Pakistan caught India completely off-guard with a Mohammed Nawaz punt as they exacted sweet revenge with a five-wicket victory in an exciting Super 4 game of the Asia Cup here on Sunday.

Chasing a tough target of 182, the ever dependable Mohammed Rizwan (71 off 51 balls) anchored the Pakistan innings but it was left-handed batter Nawaz, known more for his orthodox left-arm spin, who played the decisive knock of the match.

His 42 off 20 balls was something that India didn't factor in and there was no gameplan for him as Khushdil Shah and Iftikhar Ali completed a deserving victory with a ball to spare.

The Rizwan-Nawaz partnership of 73 in just 6.5 overs in the mid-stage of the innings had the Indians napping.

Yuzvendra Chahal (1/43 in 4 overs) and Hardik Pandya (1/44 in 4 overs), the two bowlers who were brilliant last Sunday, were pedestrian on the day as Nawaz took both of them to cleaners.

The 87 that came off their cumulative eight overs turned the match in Pakistan's favour as Nawaz hit six fours and two sixes.

While Pandya's short-ball tactic fell flat, Chahal was taken to the cleaners by both Rizwan and Nawaz as creases on Rohit Sharma's forehead increased with each passing over.

By the time Nawaz was holed out in the deep off Bhuvneshwar Kumar's bowling, he had inflicted enough damage on the psyche of the Indian attack.

Not having a replacement pacer of Avesh Khan in the main squad also affected India's chances although to be fair to Ravi Bishnoi (1/26 in 4 overs), he gave it his all.

Finally, it all ended when Bhuvneshwar gave away 19 runs in the 19th over with only seven left off Arshdeep's final over which Pakistan got with a ball to spare.

Earlier, the much-criticised top-order batters finally showed what they are capable of as India put up a stiff 181 for 7 after being put into bat.

Skipper Rohit Sharma (28) and KL Rahul (28) were outstanding in the Powerplay while Virat Kohli (60) gave glimpses of his vintage self by playing one of his most sublime knocks in recent times to take India to a more than respectable total.

What everyone wanted from India's top-order was a change in mindset and the strike rates of 175 (Rohit), 140 (Rahul) and 136 (Kohli) were a testimony to that.

Kohli deserves the maximum credit for the total India achieved against Pakistan spinners, especially leg-spinner Shadab Khan (2/31 in 4 overs), who got important wickets of Rahul and Rishabh Pant (14).

His innings had four boundaries and a six along with his signature running between the wickets where he effortlessly converted ones into twos.

Having been pilloried for their go-slow approach in the Powerplay, skipper Rohit signalled his intentions in the very first over when he gave Naseem Shah the charge and got a one-bounce-four over cover point. It was followed by a signature pull-shot for a six.

Rahul, who has been subdued against Hong Kong, beautifully picked up the cue in Naseem's next over when he read the slower one early to deposit it over long-off for a six but the shot of the innings was off the last ball. It was a helicopter shot which was pure reflex action from the Indian vice-captain.

As both settled down nicely, Rohit launched into Haris Rauf as 50 came in the fifth over and India were off the blocks for the first time in the last three games against Pakistan at this venue.

The grammar of T20 cricket has changed and Rohit's 16-ball 28 and Rahul's 20-ball 28 had the right kind of intent as well as impact which is requisite in high-pressure games.

Though Rohit mistimed a slower one from Rauf and Rahul failed to clear the long-on fence off Shadab, they had provided the platform required for Kohli to settle down nicely into a groove before he started playing his shots.

Pakistan skipper Babar Azam cleverly used his spinners Shadab and Mohammed Nawaz (4-0-25-1) well within the first 10 overs to stem the flow of runs and his ploy was only partially successful.

Thanks to Kohli and his positive approach, Pant got breathing space before he unchained himself with a pull-off Hasnain.

There was another cover drive off Naseem as the former skipper repeatedly came down the track to disturb the rhythm of the bowlers even as he lost partners at the other end.

Kohli's 50 came off 36 balls when Hasnain was deposited into the mid-wicket stands.

Ravi Bishnoi got a couple of lucky boundaries at the fag end when Fakhar Zaman made back-to-back outfield bloopers.

READ | Not bothered about how many runs Virat Kohli makes but how he makes it: Rahul Dravid
READ | IND vs PAK: Virat Kohli sets internet, cricket world on fire with 2nd 50 at 2022 Asia Cup