New Zealand born England’s World Cup hero Ben Stokes has slammed the English media for prying into the details of his private life dating 30 years ago.

England’s World Cup hero Ben Stokes has slammed the English media for prying into the details of his private life dating 30 years ago. New Zealand born England all-rounder said that he was at a loss of words for the ‘low and despicable’ behaviour displayed by an English media outlet. It has been quite a summer for Ben Stokes, beginning from the controversial World Cup final against New Zealand to his match-winning knock of 135 runs in the Ashes that saw England emerge victorious in the third Test. Ben Stokes lashed out at The Sun for using his name to ‘shatter the privacy and private lives of his parents’. The Sun reported details of an incident that involved details about the death of Ben Stokes’ brother and sister.

The England all-rounder took to the micro-blogging website to post his statement about the incident. Calling it a low and despicable behaviour disguised in the form of journalism, Ben Stokes hit out at The Sun for questioning his parents about a tragedy that was private to the family and for sensationalising the matter. Ben Stokes said his public profile was being used to invade the lives of his family members and said that the decision of the newspaper to publish his personal details will have grave consequences on his mother. He further went on to report that there were inaccuracies in the reports published and said that it has compounded the damage that has been caused. Ben Stokes concluded his statement by making a plea to respect his family’s privacy and his father’s life. Read Ben Stokes’ statement here: 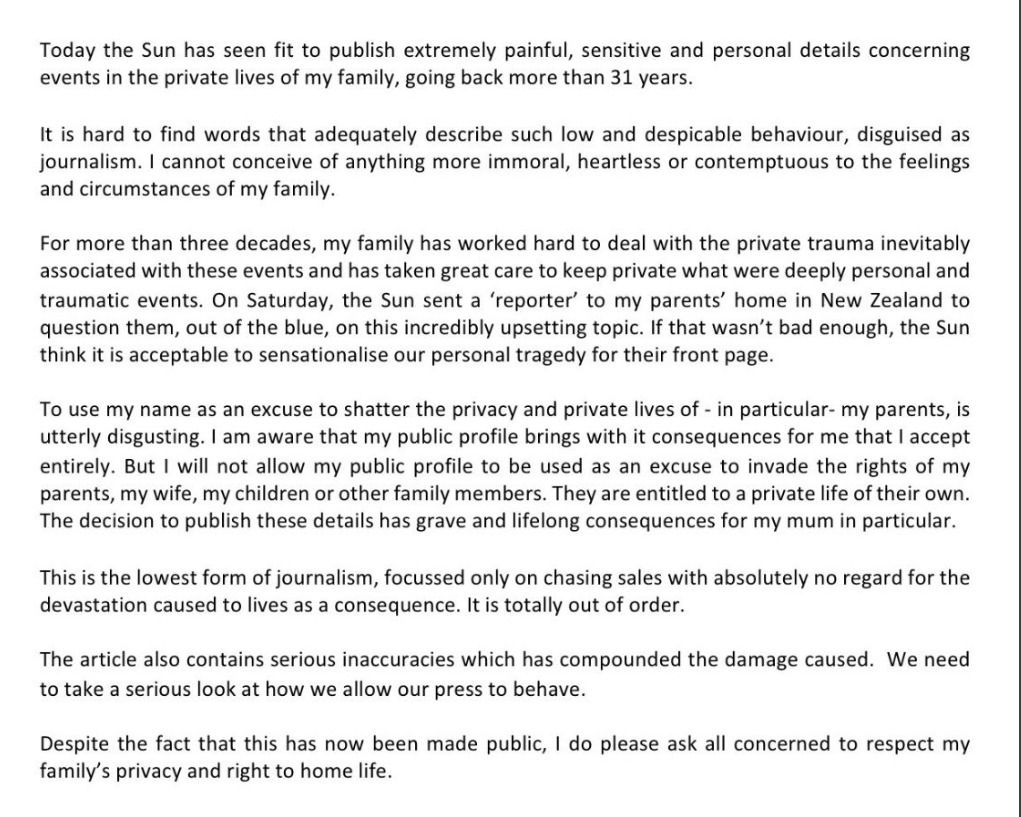 No love lost between England and Australia

The Ashes Test series ended on Sunday in a draw. England won the fifth and final Test match by 135 runs on Sunday, squaring the series 2-2. Australia, however, retained the Ashes. Post-match the English cricket team shared a picture and a video on Twitter, which showed players and the staff members of both the teams interacting with each other at the end of the match. The Ashes is known to be one of the most competitive, fierce, and aggressive tournaments not only in cricket but in world sport. Over the years, fans have witnessed multiple clashes and innumerable instances of sledging between players of the two teams which have carried on off the field in press conferences and other interactions as well. The recently concluded series saw some of it as well, with Ben Stokes calling David Warner a few harsh words. Tim Paine, the Australian Captain stepping in and calling Stokes 'Bristol' - in reference to the infamous brawl involving the English cricketer outside a nightclub in 2017. Matthew Wade was involved in multiple incidents with Jofra Archer and Joe Root. Wade was talkative throughout the series, trying to rile up the opponents. In the past, Australian Merv Hughes had a history of going at various players and at one time offered former England international batsman, Graham Gooch, a piano to see if he could play that after the latter left multiple deliveries. Shane Warne once went after Paul Collingwood, who received an MBE by the British Government. Warner, during the 2005 Ashes series said, “You’ve got an MBE, right? For scoring seven at The Oval? You’re an embarrassment.” In 1972, Derek Underwood was hurt by a delivery from Dennis Lillee and Ian Chappell, fielding in the slips went up to him, and then asked which hand was hurt. Underwood said his right hand, to which Chappel said, “That’s a shame. We were aiming for the left”. READ | Harbhajan Singh sums up 'terrific' Ashes, names his series top picks