Recently, Wasim Akram went down memory lane to recollect a game against Brian Lara after an admirable gesture by the West Indian during a charity event. 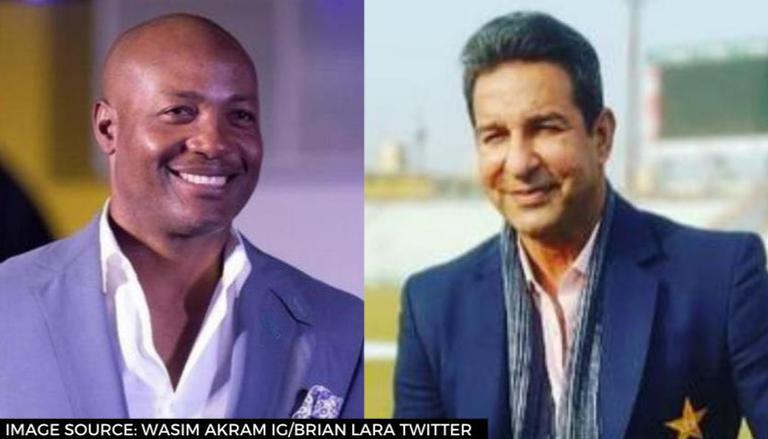 Former Pakistan captain Wasim Akram is widely regarded as one of the top fast bowlers of his time and his seam bowling was feared even by the best batsmen around the world. Due to his bowling prowess, Wasim Akram had developed some on-field rivalries with some of the best batsmen of his time, one of them being the former West Indian cricketer Brian Lara. Recently, Akram went down memory lane to recollect a game against Brian Lara after an admirable gesture by the West Indian.

Wasim Akram took to Twitter on Friday to narrate an incident involving Brian Lara which had left him amazed. The post mentioned that both the cricketers met at a charity event where Lara had brought his shoe with him for Akram to sign on it. Akram further wrote that this was the same shoe that Lara had held on to since the 1992 Cricket World Cup.

The Prince of Trinidad never ceases to amaze, years after retirement from the game! We met at a charity and he brought this shoe with him to make sure I would sign it - he’d held on to it since 1992 WC when I hit him on the toe (after he got 88!) Hold a grudge much, @BrianLara ? pic.twitter.com/wXwUf9otUt

This was the same shoe that Brian Lara was wearing while facing the fast bowling exhibition of Wasim Akram during the West Indies vs Pakistan match of the 1992 World Cup. Wasim Akram had bowled a toe-crushing yorker delivery after which Brian Lara was declared as retired hurt from the match. Upon experiencing Brian Lara’s admirable gesture at the charity event, Akram wrote that the Prince of Trinidad never ceased to amaze even after years of retirement from the game. Akram even addressed the gesture in a humorous way while asking the West Indian legend whether he held a grudge against him.

The West Indies vs Pakistan match of the 1992 World Cup

It was the 4th match of the 1992 Cricket World Cup where Pakistan went against the West Indies on February 23, 1992. Batting first, Pakistan posted a score of 220 runs after losing just 2 wickets. While the West Indies team never lost a wicket, it was Brian Lara who had to depart after being retired hurt from Wasim Akram’s toe-crushing delivery in the West Indies vs Pakistan match. Desmond Haynes and Brian Lara scored 93 and 88 runs in the match respectively which helped West Indies win the match by 10 wickets.

Wasim Akram’s main contribution to the Pakistani cricket team came through his fast bowling ability that will be remembered throughout history. The Wasim Akram Test record also registers the fast bowler as the highest wicket-taker for Pakistan in Test cricket with 414 wickets. He also holds the record for 4 international hat-tricks in cricket with 2 hat-tricks in ODI and the other 2 in Test cricket. He was also the first bowler to cross the mark of 500 wickets.