Harbhajan Singh has clarified that he wants to play for CSK in next edition of IPL. Bhajji has played for CSK in two editions where they had made to the finals

Senior off-spinner Harbhajan Singh on Friday clarified that he will be playing the next edition of the Indian Premier League for Chennai Super Kings (CSK) and will withdraw his name from the Players' Draft of the new 'The Hundred' league in the United Kingdom. There was some flutter created as Harbhajan's name was included in Players' Draft at a base price of GBP 100,000 for this ambitious project but being an active cricketer, the BCCI rules would not have allowed him to play without a formal announcement of retirement.

READ | Shahid Afridi trolled by Nick Compton, Pakistani fans give it back

Harbhajan wants to play for CSK in IPL

"For me, Indian Premier League and Chennai Super Kings remain priorities. I have had two good seasons with CSK where we played two finals. So right now, a good third season is what I am looking at," Harbhajan told PTI.

Asked to clear the air, India's third-highest wicket-taker in Tests said, "I respect rules laid down by my parent body. I will never flout any BCCI rule. If that means withdrawing my name from the draft, so be it. I will withdraw my name." However, he admitted that the concept of 100-ball format does excite him even though he won't be able to take part for the time being.

"I don't want to break any rules but I find the concept interesting. As and when, the rules allow me to play, I would definitely like to be a part of it," the 'Turbanator' said. Harbhajan is currently doing commentary for the India versus South Africa series. It is expected that he will be back training after the series as he is set to play Syed Mushtaq Ali Trophy (National T20) for Punjab to get some game time.

READ | Ravichandra Ashwin: "It was very tough to stay away from cricket"

Earlier, Harbhajan Singh had slammed the MSK Prasad-led Indian selection committee for ignoring Suryakumar Yadav after he had smashed a 31-ball 81 in a Vijay Hazare Trophy game against Chhattisgarh. The 2011 World Cup-winner strongly believes that the selection committee has remained keen on ignoring Suryakumar in spite of his recent domestic exploits. Meanwhile, Bhajji also had some encouraging words for the right-hander and urged him to keep working hard. At the same time, Harbhajan assured Yadav that his time will come. 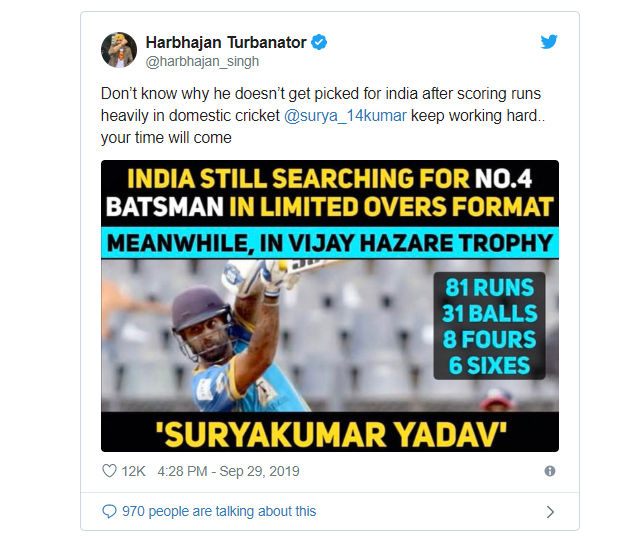