After the completion of New Zealand's innings, Harshal Patel was asked what exactly Head Coach Rahul Dravid told him when he was handed over the debut cap? 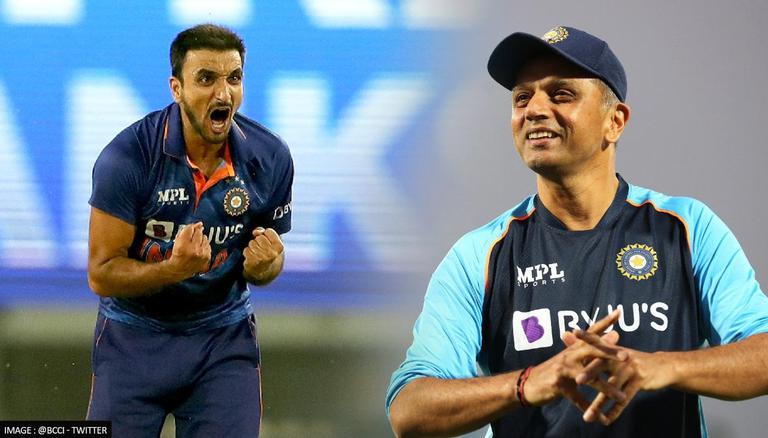 
Harshal Patel on Friday made his debut for Team India in the second T20 international of the 3 matches series in Ranchi. Harshal Patel was the Purple cap winner in the IPL 2021 and due to that, he was added to Team India's squad in the T20 World Cup as a net-bowler. Finally, during the India vs New Zealand second T20 match, Harshal Patel got the opportunity to don the India jersey and the 30-year-old cricketer did not disappoint.

Harshal Patel also impressed the cricket experts and fans as bowled brilliantly on his debut match. Patel on Friday took 2 wickets and gave away 25 runs in his quota of 4 overs. He was handed over his debut cap by India's former speedster Ajit Agarkar. After the completion of New Zealand's innings, Harshal Patel was asked what exactly Head Coach Rahul Dravid told him when he was handed over the debut cap?

Speaking to the broadcasters, Harshal Patel said, "It's a great feeling playing for the country. I love the game and the ultimate goal for any player is to play for the country, it's an honor, it's a privilege and I'm not going to take it for granted. Rahul (Dravid) sir has always told me that once you are done with the preparations, you gotta go out there and enjoy the game. After 9-10 years of domestic cricket and on the back of a good IPL I've reached here. So it's a satisfying moment for me."

🎥 🎥 Congratulations to @HarshalPatel23 who is set to make his #TeamIndia debut. 👏 👏@Paytm #INDvNZ pic.twitter.com/n9IIPXFJQ7

Coming to the India vs New Zealand second T20 match, the Black Caps went off to a flying start, courtesy of Martin Guptill's 31 off 15 balls and Daryl Mitchell's 31 off 28 balls. For India, Harshal Patel made his debut in place of Mohammed Siraj who suffered an injury in the first T20 match against New Zealand. BCCI's official statement read, "Siraj got a web split on his left hand while fielding on his own bowling in the 1st T20I in Jaipur. The BCCI medical team is closely monitoring his progress."

Harshal Patel impressed on his debut as he bagged 2 wickets and gave away only 25 runs in 4 Overs. Apart from Harshal Patel, off-spinner Ravichandran Ashwin too shined with the ball as he took 1 wicket and gave away only 19 runs in 4 overs. Ashwin's economical over came at a time amidst heavy dew in Ranchi and bowlers struggling to grip the ball. At last, New Zealand scored 153 runs in 20 overs and lost 6 wickets.