Hitman Rohit Sharma's Picture Of His 'two Pies' Is Too Cute For Words. Take A Look

Rohit Sharma has posted an adorable picture of his wife Ritika and daughter Samaira on his Instagram.

After a dream run, Team India's journey in the ICC Cricket World Cup 2019 came to an abrupt end in the semi-final against New Zealand at the Old Trafford in Manchester on Wednesday. India who had topped the league table with seven wins from nine games and 15 points suffered a huge setback against the Kiwis who overcame them by 18 runs in an edge-of-the-seat thriller.

Meanwhile, Indian vice-captain Rohit Sharma has returned back to India along with his better half Ritika and daughter Samaira ahead of his team-mates who will be dispersing from London on Sunday.  According to reports, the dashing opening batsman was spotted at the Mumbai airport with his family as they headed back home.

Sharma has now posted an adorable picture of his wife and daughter on his Instagram. Take a look.

This picture ended up winning the hearts of the fans. Here are a few reactions. 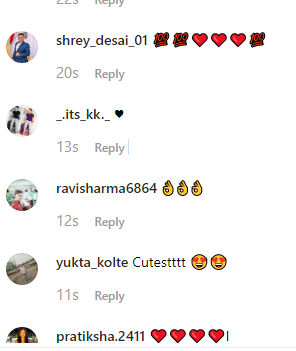 World Cup: Footballer Harry Kane Has A Special Message For The England Team As They Eye Their Maiden Title Against New Zealand, Watch Here

Prior to India's semi-final clash against the Kiwis, the Hitman had also shared a cute picture of his family after he had hit his record World Cup century against Sri Lanka with a caption 'Nothing can beat this, when your loved ones are up there in the stands rooting for you with fingers crossed'.

Nothing can beat this, when your loved ones are up there in the stands rooting for you with fingers crossed 🤞 pic.twitter.com/xPZSvlDba5

Despite India's ouster, Sharma is still the leading run scorer of the ongoing quadrennial event. The dynamic opening batsman has scored 648 runs from nine matches which includes five centuries which is the most in a single edition of the showpiece event. However, he got out very early in the semis for 1 as India reeled at 5/3 against the Kiwis.

Ravindra Jadeja scored a blistering 59-ball 77 at a strike rate of 130.51 including four boundaries and four maximums and was involved in a 116-run stand for the seventh wicket with MS Dhoni and almost took India on the cusp of victory.  Unfortunately, he was dismissed in the 48th over by Trent Boult.

However, the hopes were not lost till Dhoni was there in the middle as everyone was confident that he would do the unthinkable. But, a sharp throw from Martin Guptill in the penultimate over ran him out as the Kiwis emerged victorious by 18 runs with three balls to spare.

MUST WATCH: This Video Of An Elderly Fan Imitating Jasprit Bumrah's Unique Bowling Action Will Surely Make Your Day