Rahul Dravid was addressed as a left-handed batsman by ICC in the Hall of Fame page of their website. After receiving backlash, the error was rectified.

Rahul Dravid was listed as a left-handed batsman instead of right-handed by the International Cricket Council (ICC) in the Hall of Fame page on their website. Dravid was a right-handed batsman who was known for his rock-solid defence during his playing days which earned him the nickname 'The Wall'. Apart from his wonderful batting, he was also known as a brilliant slip fielder with a great presence of mind. Rahul Dravid was also a part-time spinner initially in his career and a part-time wicket-keeper as well.

READ: ICC goofs up: States Dravid as a 'Left-Handed' Batsman on its website

After ICC had goofed up big time with the profile of a legendary player, they had to face the wrath of irate fans on social media. However, now, the governing body of world cricket have rectified their error and updated Rahul Dravid's profile as a right-handed batsman. Take a look. 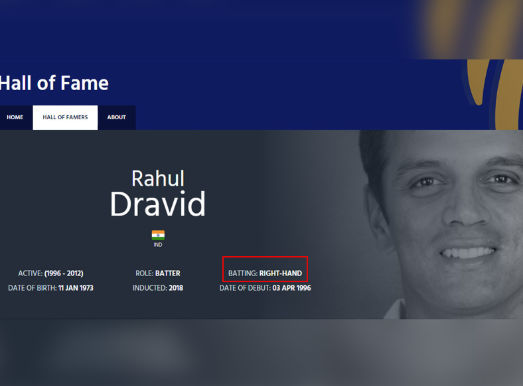 READ: MS Dhoni to return to action for India in the West Indies T20 series?

Rahul Dravid currently heads the National Cricket Academy (NCA) which is located in the Chinnaswamy Stadium. The former Indian skipper took some time out to meet the players and interacted with youngsters like Rishabh Pant and head coach Ravi Shastri. However, what ended up grabbing everyone's attention was the ex-cricketer's interaction with the current captain Virat Kohli. Rahul Dravid has played a huge role in nurturing Kohli when the batting superstar had made his debut for the Royal Challengers Bangalore in the inaugural edition of the Indian Premier League (IPL) which was led by 'The Wall' himself.

READ: Rishabh Pant - The curious case of the inconsistencies despite talent

The illustrious career of Rahul Dravid

Rahul Dravid had made his international debut in 1996 and bid adieu to the game in 2012. In his 16-year illustrious career, 'The Wall' has represented India in 164 Tests and 344 ODIs and has scored a total of 24,177 runs across both formats. Currently, Rahul Dravid serves as the Overseas Batting Consultant for the Indian Cricket Team, and also as the Head of Cricket Operations at the National Cricket Academy (NCA). Dravid has also been honoured with the Padma Shri and the Padma Bhushan awards. He had also played for India in three World Cups i.e. 1999, 2003 and 2007 respectively. He was the leading run-scorer of the 1999 edition with 461 runs. Dravid was the vice-captain in the 2003 World Cup where India had finished as the runners-up. He led the team in 2007 but had a forgettable outing as they were knocked out in the group stages itself.