Ishan Kishan announced himself in ODI cricket by smashing Sri Lanka spinner Dhananjaya de Silva for a six over long on off his first delivery. 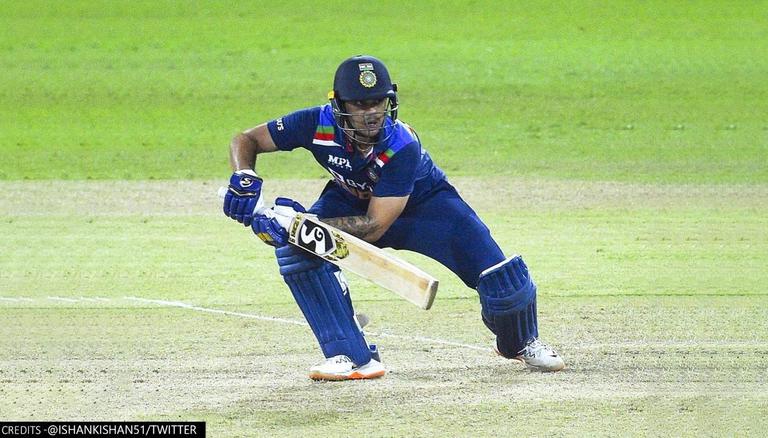 
Ishan Kishan continued his rapid rise in international cricket  with yet another stellar knock on Sunday as India beat Sri Lanka by 7 wickets inthe 1st ODI. The India vs Sri Lanka 1st ODI witnessed Ishan Kishan and his Mumbai Indians teammate Suryakumar Yadav receiving their debut caps. The wicket-keeper batsman justified his inclusion in the side  by scoring 59 runs off 42 balls as he entered his name in the record books.

The youngster who turned 23 on Sunday celebrated the occasion with a match winning knock for the team. Following the comfortable win, Kishan took to twitter and penned down his feelings on making his ODI debut. He wrote that wearing the Indian jersey was his dream which turned into reality. He even thanked the people who had supported him and even shared his goal for the future.

My dream turning into reality and there is no better feeling. Wearing the India blue is such an honor. Thank you everyone for your wishes and support. The goal remains to continue the hard work, giving it my all for my country 🇮🇳💙😍 pic.twitter.com/YzjWtSjnT2

Ishan made his debut for India during the T20I series against England earlier this year. He announced himself on the international arena by smashing his first-ever delivery for a boundary. On Sunday, the left- hander went a step ahead by dancing down the track and smashing Dhananjaya de Silva for a six over long on off his first delivery in ODI cricket. He became the first-ever Indian batsman to do so on ODI debut.

Surya Kumar Yadav who also made his debut was also full of praise for his Mumbai Indians teammate calling his knock outstanding and even wished him on his birthday. He also wrote about his feeling of making ODI debut for Indis is incomparable after all the years of hardwork, patience perseverance that he had put behind to reach the top.

Patience. Perseverance. Hardwork.💯
A feeling comparable to none♥️🇮🇳
What a compelling win today💪🏽

To our goofball, @ishankishan51 you were outstanding tonight. Happiest birthday to you, champ!🔥 pic.twitter.com/or8vRW1O9X

The opening match of the ODI series turned out be a one-sided affair as India comfortable beat Sri Lanka by 7 wickets thanks to brilliant knock from skipper Shikhar Dhawan, Prithvi Shaw and Ishan Kishan . The host after winning the toss managed to reach 262/9 from their 50 overs with the likes of opener Avishka Fernando (33), middle-order batsman Charith Aslanka (33), and skipper Dasun Shanaka (39) chipping in with the bat.

Indian pacer Deepak Chahar and the spin duo of  Yuzvendra Chahal and Kuldeep Yadav chipped in with 2 wickets each, while Krunal Pandya bowled brilliantly to concede just 26 runs in 10 overs and evenb picked up one wicket. In reply Prithvi Shaw dominated Sri Lanka bowlers during the run chase  before losing his wicket. Following Shaw's dismissal, captain Dhawan anchored the innings and was ably supported by young debutant Ishan Kishan (42-ball 59). The duo added 85 runs for the third wicket before the latter's dismissal.