While the whole of India is too excited for the historic and first-ever Day-Night pink-ball Test in India, vice-skipper Rahane is literally dreaming about it

While the whole of Team India and its fans are way too excited for the historic and first-ever Day-Night pink-ball Test in India, vice-skipper Ajinkya Rahane is literally 'dreaming' about the pink ball. Such is the excitement levels amongst the cricketers and the fans as we near the second Test game at Eden Gardens Stadium in Kolkata on November 22. Rahane took to his social media to post a picture of himself sleeping and a pink ball sticker added right above his head. Rahane expressed his excitement by writing that he was already dreaming about the pink-ball Test. While Rahane's excitement caught the eyes of India's skipper Virat Kohli - who cheekily complimented Rahane, limited-overs' opener Shikhar Dhawan questioned the impossible - how did Rahane manage to get a picture of his dream.

Rahane is 'already dreaming' about the pink ball Test

A cheeky compliment from Kohli, suspicion from Dhawan 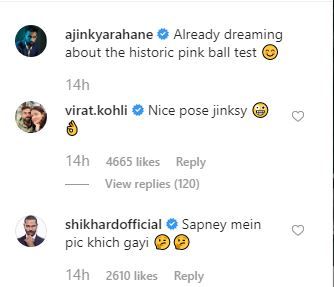 Rahane, Kohli to get be the first to lay hands on pink ball

Skipper Virat Kohli and vice-captain Ajinkya Rahane will be the first to arrive here on Tuesday morning ahead of India's first-ever Day/Night Test beginning on November 22. The duo are scheduled to arrive at 9.40am, while the rest of the team will arrive in batches, local team manager Samrat Bhowmcik told PTI. Giving out the arrival itinerary of the teams, he said Rohit Sharma and pacer Mohammed Shami would be the last to join the squad on Wednesday.

"Ishant Sharma is slated to arrive Tuesday night, while other members of the squad along with the full Bangladeshi contingent are scheduled to arrive together in the afternoon," he said.

However there is no scheduled practice for Tuesday. "But you never know if the captain wants to have a feel of the stadium, he might just drop in," he said. India had taken a 1-0 lead in the two-match series after beating Bangladesh by an innings and 130 runs inside three days and they will look to seal their 12th successive home series victory in the Eden pink-ball Test. Both teams will play their first-ever day/night Test.