Mayank Agarwal scored a gritty 150 runs in the first innings of the IND vs NZ Test and later posed alongside his name inscribed on the Wankhede Honours Board. 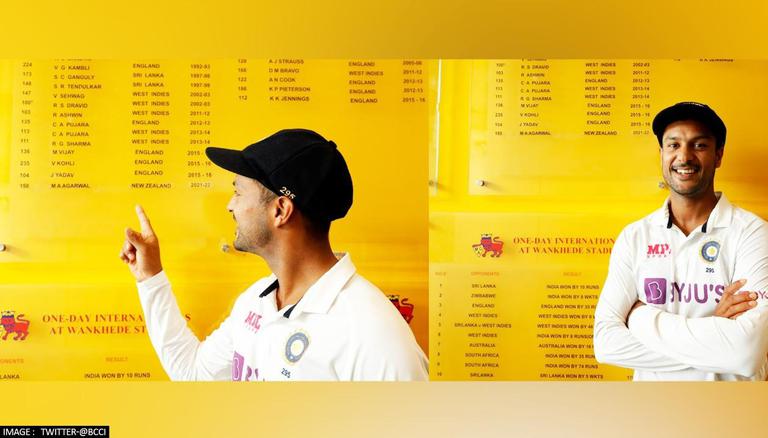 
India clinched the two-match Test series against New Zealand 1-0 by winning the second Test match at the Wankhede Stadium by 372 runs on Monday. Indian cricketer Mayank Agarwal was one of the key factors behind India’s stellar all-round show in the match as he contributed to the team’s cause by scoring a century in the first innings, followed by a half-century in the second. Following the conclusion of the match, the 30-year-old cricketer found his name inscribed on Wankhede Honours Board, alongside previous centurions like Jayant Yadav, Virat Kohli, Murli Vijar, Rohit Sharma, Cheteshwar Pujara, Ravichandran Ashwin, and India’s current head coach Rahul Dravid.

Name inscribed on the Honours Board at the Wankhede! 🙌 🙌

Mayank was later awarded the Player of the Match award for his stellar batting show in the absence of openers Rohit and KL Rahul. He is now being deemed as India’s third opening option as he got the better of Shubman Gill during the two-match Test series. Mayank scored a total of 242 runs in the Two Test at an average of 60.50, while Shubman scored 144 runs for India at a strike rate of 59.50 and an average of 36.00 which included only one half-century.

Meanwhile, the knock of 150 runs was Mayank’s fourth International Test century and the first since 2019. Ahead of the Wankhede Test, he last crossed the century mark during his knock of 243 runs against Bangladesh in 2019, after scoring 215 and 108 runs against South Africa in the same year. The talented opener has scored a grand total of 1294 runs while representing India in 16 Test matches, since making his international debut back in December of 2018 against Australia at Melbourne.