Team India slumped to a seven-wicket defeat in Christchurch to concede the Test series 0-2 in favour of New Zealand. Throughout the series, the Indian batsmen succumbed to the pace and swing of the New Zealand bowlers and surrendered meekly in difficult foreign conditions. Virat Kohli’s form turned out to be one of the biggest factors behind India’s struggles as the Indian captain managed to score just 38 runs in the two Tests. Apart from his struggles with the bat, Kohli has also been at the receiving end of a lot of criticism for some of his recent on-field behaviour.

During the third day of the Christchurch Test, New Zealand were chasing 132 to complete a clean-sweep over the Indians. In the middle of their run-chase, Virat Kohli was heard shouting: “Jab India mein yeh log aayengey, tab dikha doonga (When they will come to India, we will show them).” His behaviour did not seem to have gone down well in the cricketing fraternity as the 31-year old has been facing some flak for his comments.

Former Australian cricketer Mitchell Johnson took note of the incident and posted a picture of Virat Kohli along with his comments. Johnson also wrote “This gave me a laugh” alongside a laughing emoji in his post. Incidentally, both Mitchell Johnson and Virat Kohli have been familiar foes of each other ever since their altercation in December 2014. Here is the picture posted by the 2015 World Cup winner on his Instagram story. Mitchell Johnson’s post ignited a number of Indian fans to respond with much severity. However, the legendary pacer seemed unfazed by the harsh reactions of Indian fans and instead said that he was enjoying the backlash. He also posted a few pictures of the fans replies while stating the same. 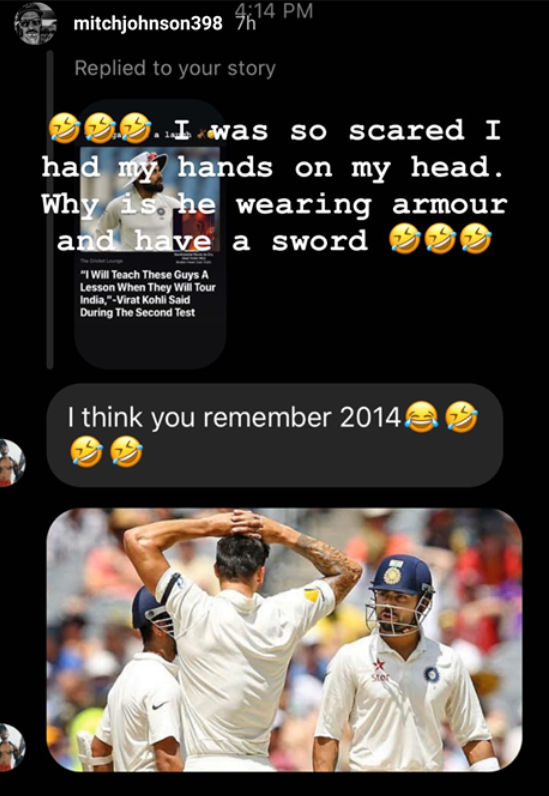 Meanwhile, as India completes their impending home ODI series against South Africa, Virat Kohli will now be seen leading the charge of the Royal Challengers Bangalore (RCB) unit in the Indian Premier League (IPL 2020) season. The cricketer was retained by the franchise for ₹17 crore during the recently concluded IPL 2020 trading window. RCB will begin their IPL 2020 campaign against Kolkata Knight Riders on March 31.