Pakistani Fans Say MS Dhoni Was Never As Good As Rizwan, Get Reality Check From Netizens

A Pakistani fan has been given a reality check by a few Indian social media users after they posted that Mohammad Rizwan is a better player than MS Dhoni. 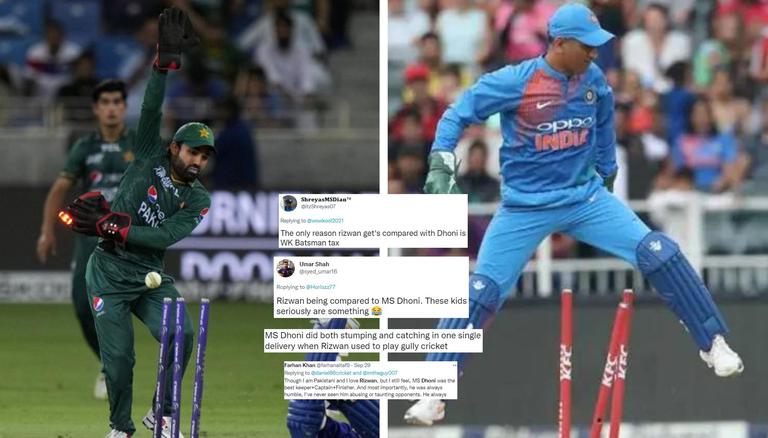 
Some Pakistani fans have been given a reality check by social media users after they posted that Mohammad Rizwan is a better player than legendary captain MS Dhoni. While Rizwan has been in outstanding form this year, Dhoni not only delivered with both the bat and with the gloves for almost two decades, but he also brilliantly led India to two ICC World Cup titles. Dhoni won his first major competition as the skipper at the 2007 T20 World Cup before also going on to win the 2011 ODI World Cup.

Pakistan fan gets slammed for post on Rizwan & Dhoni

Video of Rizwan getting Moeen Ali out through a brilliant stumping was going viral. Some overexcited Pakistani fans started saying that Rizwan is better keeper than Dhoni.

Rizwan better keeper than Dhoni. That was a real quick reaction from the superman! 🔥💯 #PakvsEng2022

After getting slammed on social media for stating that Mohammed Rizwan is better than MS Dhoni, a Pakistan fan made his Twitter account private. While his initial post cannot be seen, below is a look at several reactions to his post.

@Hariszz77 He made his account private because of the replies that he got when he said 'MS Dhoni can never be good as Rizwan' by showing the good stumping done by Rizwan against Eng. Dhoni is a legend but Rizwan is just emerging up in his career..

I have owned him :) pic.twitter.com/BTs4E5sgRI

Across all international formats, MS Dhoni scored a staggering 17,266 runs during his illustrious 15-year career despite batting lower down the order on most occasions. He held an outstanding average of 44.96 and a strike rate of 79.07, with 16 centuries and 108 fifties to his name.

Among all the international formats. the legendary Indian skipper was most successful in ODIs. He smacked 10773 runs alone in this format after playing in 350 games, registering 10 centuries and 73 fifties. He had a brilliant average of 50.57 and a strike rate of 87.56.

Even though he has been nothing short of fantastic recently, it is fair to say that he is still way off Dhoni, and hence, comparisons between the two are still premature. As for Rizwan, he will now hope to contribute with both the bat and behind the stumps for Pakistan at the upcoming T20 World Cup.

READ | Don't know what Mahi bhai was thinking: Shardul recalls Dhoni's act of genius in IPL final
SUBSCRIBE TO US