Rahul Dravid turned 47 on Saturday. Wishes poured in for the former Indian skipper from the fans and the cricketing fraternity which also included the Board of Control for Cricket in India (BCCI). As Dravid turns a year older, the International Cricket Council (ICC) also came forward to wish the legendary cricketer.

READ: BCCI pays tribute to Rahul Dravid with a throwback to one of his monumental ODI knocks

Taking to the micro-blogging site, ICC wished Rahul Dravid and also highlighted some of the huge achievements of the 'Wall of Indian Cricket' in his glorious career.

As per ICC's tweets, Rahul Dravid has scored over 10,000 runs in both Tests and One Day Internationals faced more Test deliveries than any other batsman in the history of the game, is the only player to be involved in two 300-plus ODI partnerships and has 48 international centuries to his name.

👉 Scored over 10,000 runs in both Tests and ODIs
👉 Faced more Test deliveries than any other batsman
👉 Only player to be involved in two 300-plus ODI partnerships
👉 48 international centuries

🗯️ What are your favourite memories of 'The Wall'? pic.twitter.com/m3tvtNA3g6

Meanwhile, the governing body of world cricket also went on to ask the fans about their favourite memories of 'The Wall'. Here are some of the answers. 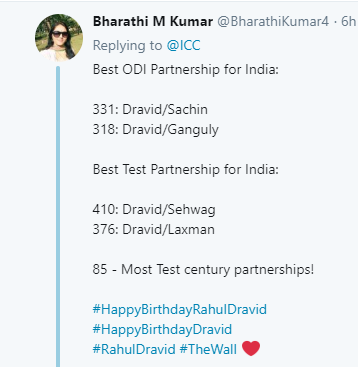 READ: Finch's goal is to continue till 2023 World Cup if form and fitness permit

Rahul Dravid had represented India from 1996 to 2012. In his 16-year illustrious cricketing career, he has represented India in 164 Tests and 344 One Day Internationals. He went on to become both the vice-captain as well as the captain of the Indian team in his successful career. Dravid, who is nicknamed as 'The Wall' has also donned the wicket-keeper's gloves especially during the 2003 World Cup where India had finished as the runners-up.

Rahul Dravid, who is fondly addressed as 'Jammy' has been a part of many of India's glorious triumphs which include that famous win in the 2002 tri-series in England, ICC Champions Trophy in the same year where India were declared as joint winners along with Sri Lanka, the Test series in Australia in 2003-04 and the historic series against Pakistan that followed.

READ: Hardik to be back for white ball leg, Gill or Rahul for 3rd opener in Tests for NZ tour