Sarfaraz Ahmed Gets Trolled After Indulging In A Hilarious Run Out

Sarfaraz Ahmed was trolled by fans on social media after he was involved in a hilarious run out just when Pakistan seemed to be in control against Sri Lanka.

Sarfaraz Ahmed has been at the receiving end of the trolls on social media on most of the occasions throughout this year. It all started during the ICC Cricket World Cup 2019 when he was seen yawning during Pakistan's match against arch-rivals India. After the Men In Green suffered a humiliating loss, the Pakistan skipper was criticised by fast bowling icon Shoaib Akhtar who had termed his captaincy as 'brainless'.Later he was fat-shamed by a Pakistani fan at a mall which he had visited along with his son. Sarfaraz was once again seen as a hero after Pakistan won all their matches at the quadrennial event but now, he has once again become a subject of jokes during the 1st T20I against Sri Lanka.

Sarfaraz trolled for a hilarious run-out

It happened during the 12th over of Pakistan's run chase at Lahore. Chasing a target of 166, Pakistan were reduced to 22/3 after their star batsman Babar Azam, Umar Akmal and Ahmed Shahzad were sent back to the pavilion. Skipper Sarfaraz Ahmed along with Iftikhar Ahmed tried to rebuild for the hosts but a comical incident dashed away their hopes.

On the third ball of the 12th over, Iftikhar dodged a good yorker and then thought about taking a risky single. However, the fielder at the covers fielded the ball well which forced the batsman to change his mind at the very last minute. Meanwhile, Sarfaraz had come down a long way and went even he had no choice but ground his bat at the striker's end while  Iftikhar went back to the same end as well. In a hilarious turn of events, both batsmen were seen stranded at the batsmen's end while Isuru Udana dislodged the bails at the bowler's end as the Lankan players celebrated. A wicket had fallen but only one batsman could be given out. The on-field umpires referred the matter to the third umpire and replays showed that Sarfaraz Ahmed had made his ground first as Iftikhar had to take a long walk back. Even the Pakistan captain could not make the most of his opportunities as he was castled a couple of overs later by Wanindu Hasaranga. The top-ranked T20I side was bundled out for 101 in the 18th over as Sri Lanka registered a 64-run win to go 1-0 up in the three-match series.

Watch the video of this hilarious run out here.

The netizens trolled Sarfaraz Ahmed for his recklessness. Here are some of the reactions. 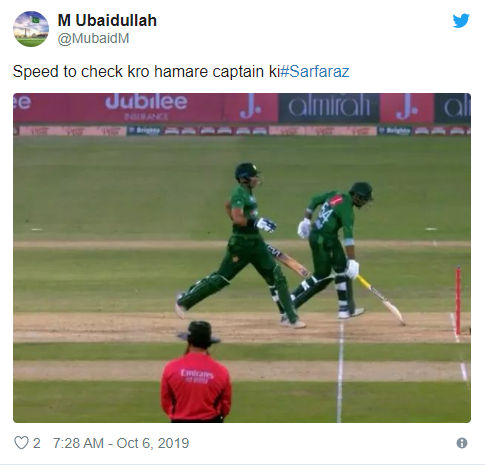