Sarfaraz has played 22 innings in Ranji Trophy since 2019 and has scored 2289 runs at a staggering average of 134.64, including nine centuries and five fifties. 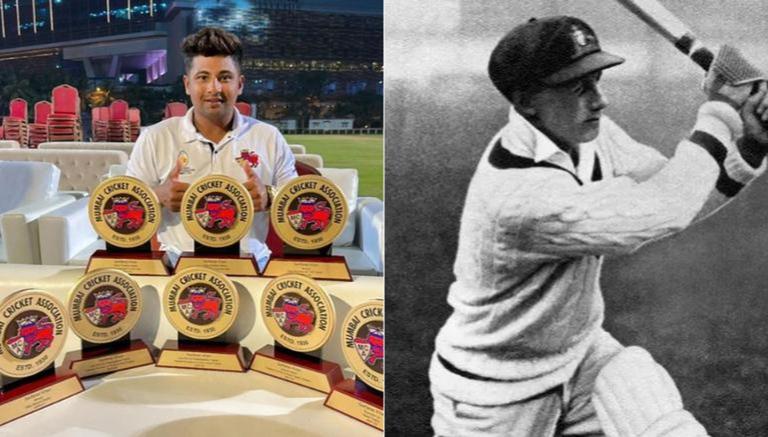 
Mumbai cricketer Sarfaraz Khan on Saturday shared a cryptic post on Instagram, where he reminded Indian selectors of his Don Bradman-like stats in first-class cricket. The BCCI once again snubbed Sarfaraz from the India squad when it announced a 17-member team for the upcoming Border-Gavaskar Trophy (Test series) against Australia. Despite his brilliant performance in Ranji Trophy for the past two seasons, the 25-year-old did not get a chance to prove his mantle on the international stage.

Sarfaraz on Saturday shared a picture comparing his first-class stats to that of Sir Don Bradman to remind the Indian selectors of his presence among probables. Sarfaraz boasts the second-highest batting average (minimum 50 innings) in first-class cricket after the legendary Australian player Don Bradman. Sarfaraz has played 36 first-class matches for Mumbai and has scored 3380 runs at an average of 80.46. Bradman, who has a Test batting average of 99.94, averages 95.14 in domestic red-ball cricket.

Sarfaraz has played 22 innings in Ranji Trophy since 2019 and has scored 2289 runs at a staggering average of 134.64, including nine centuries and five half-centuries. He has also registered one triple century and three double hundred during the same period. Sarfaraz has played 26 List-A games and has scored 469 runs at an average of 39.08, including two half-centuries.

Sarfaraz's exclusion from the Test squad triggered a heated debate on social media with many former players and cricket experts coming in support of the Mumbai batsman. Indian cricket fans also expressed their disappointment with Chatan Sharma-led selection committee's decision to snub Sarfaraz from the Australia Test series.

People want Sarfaraz added to the squad because the upcoming Test series against Australia will be played in India, the apt place for an Indian newcomer to make his international debut as it will provide him with the home condition advantage.

Note: Ravindra Jadeja’s inclusion in the squad is subject to fitness.