After putting up a dominant display against Bangladesh in the second T20 at Rajkot, members of Team India were seen having some fun off the field. India's explosive opener Shikhar Dhawan along with his teammates Khaleel Ahmed and Yuzvendra Chahal was seen having a good laugh after mimicking Akshay Kumar's character from the movie Houseful 4. The opener took to his social media handle to post a video of him mimicking Akshay Kumar's character Bala from the movie and is seen acting out Akshay Kumar's part where he forgets what he was saying on hearing a ringing sound. Khaleel Ahmed is seen asking Shikhar Dhawan about Rohit Sharma's gloves following which Yuzvendra Chahal ' rings' the bell (hammers a bowl with a spoon). Instantly, background music is contributed by another member and the act continues, leaving the Indian teammates in peals of laughter. While Shikhar Dhawan's hilarious mimicry invited funny reactions from his teammates, Afghanistan skipper Rashid Khan also commented on Dhawan's post and said that he loved Shikhar Dhawan's mimicry. 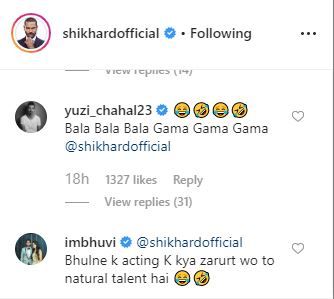 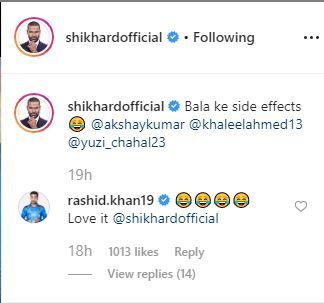 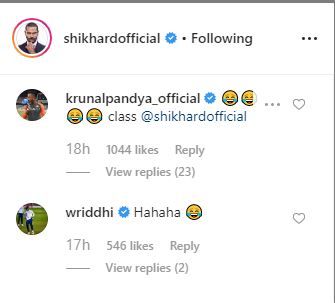 After winning the second T20I match by eight wickets against Bangladesh, India opener Shikhar Dhawan took to his Instagram account and shared a video of fans cheering. He thanked his fans for all the support the team received during the match. Dhawan also praised interim captain, Rohit Sharma who smashed 85 runs in 43 balls in his 100th T20I, "Kudos to Rohit Sharma for his great knock," wrote Dhawan. After tieing the ongoing series 1-1, the two teams will face each other in the third and deciding T20 match, which will be played on November 10, in Nagpur. Rohit Sharma smashed 85 runs in his 100th T20 international as India rode his heroics to register an eight-wicket victory over Bangladesh in the 2nd Test to level the three-match series 1-1. Chasing a modest target of 154 for victory, Rohit Sharma was at his imperious best from the word 'go' as he hit 6 fours and 6 sixes to take the tie away from the visitors single-handedly. Sharma was looking good for his fifth T20I century but fell short in the end as he was caught by Mohammad Mithun off Aminul Islam in the 13th over. Shikhar Dhawan, on the other hand, scored 31 runs before trying to step out and hit the ball for a six and losing his leg stump in the process to Islam. In the end, Shreyas Iyer smashed 24 off just 13 balls to remain unbeaten along with KL Rahul (8 not out) as India won with 26 balls to spare. The night, belonged to Rohit Sharma as the ace batsman, became first Indian to play 100 T20I internationals. He also smashed his 18th T20 fifty off just 23 balls and then smashed Mosaddek Hossain for three back-to-back sixes in the 10th over to underline his ruthlessness.