As MI vs SRH match is underway, Mumbai Indians opener Ishan Kishan on Friday went berserk & provided a perfect platform for his team in do or die match. 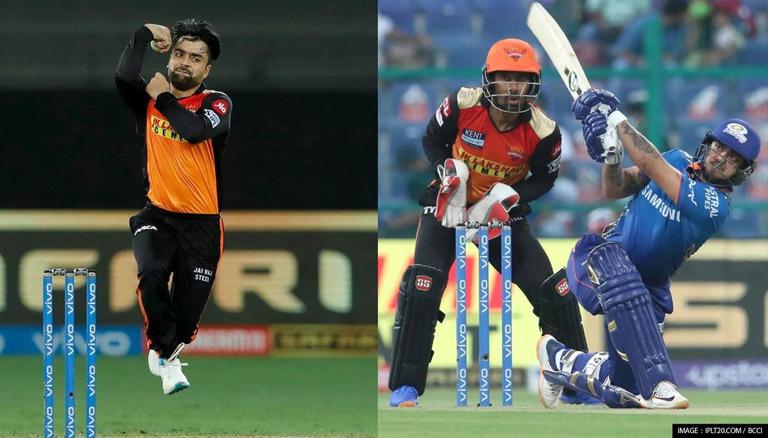 
As MI vs SRH match is underway in Abu Dhabi, Mumbai Indians opener Ishan Kishan on Friday went berserk and provided a perfect platform for his team to post a big total in their final league match. Mumbai Indians need to script history against the SunRisers Hyderabad in order to qualify for the IPL 2021 playoffs.

To qualify for the playoffs, Mumbai Indians need to beat Sunrisers Hyderabad by 171 runs. If they do so, their net run-rate will become better than KKR, who are currently at fourth spot.

Ishan Kishan's fiery knock of 84 runs saw him smack one of the best T20 bowlers, Rashid Khan, for a monstrous six. During the start of the 7th over of the innings, Rashid Khan came on to bowl against Ishan Kishan, who was smashing almost every bowler of the SRH line-up.

The 23-year-old leg spinner bowled a full-length delivery. However, Kishan who had already cleared his front leg, smashed the ball for a monstrous six of 104m.

Ishan Kishan goes on a record-breaking spree against SRH

Ishan Kishan played a sensational knock of 84 runs in just 32 balls with the help of 11 boundaries and 4 sixes. However, the Mumbai Indians opener was dismissed by SRH sensation Umran Malik. In his knock, Ishan Kishan also went on a record-breaking spree as he smashed the fastest fifty by any Mumbai Indians batsman in the history of the IPL, overtaking his own record which he jointly held with Kieron Pollard.

Ishan Kishan completed his half-century in just 16 balls. Earlier, the fastest half-century by a Mumbai Indians player was in 17 balls. The record was jointly held by Kieron Pollard, Ishan Kishan, and Hardik Pandya.

Apart from the fastest fifty, Ishan Kishan became the third batter in the Indian Premier League (IPL) to reach a half-century within four overs of an innings.

Fans laud Ishan Kishan for his fiery knock against SRH

What an Innings played by Ishan Kishan

He scored 84 runs from 32 balls including 11 Fours and 4 Sixes against SRH. Unbelievable Innings from Ishan Kishan. #MIvsSRH pic.twitter.com/gCs44YEb0K

Ishan Kishan goes for an astonishing 84 in just 32 balls. What an innings this was by Kishan, one of the best you'll ever see.

REMEMBER THE NAME ISHAN KISHAN. WHAT A KNOCK MAN. SO PROUD OF YOU @ishankishan51 pic.twitter.com/EjvYULGQMT

WE RECOMMEND
Mumbai Indians playoff chances: How MI can qualify for IPL 2021 final four?
Ishan Kishan smashes fifty off just 16 balls; fastest by a Mumbai Indians batsman
IPL 2021: Gautam Gambhir says KL Rahul might have more ability than Rohit Sharma, Kohli
Why are SRH vs MI and DC vs RCB starting at same time in IPL 2021?
IPL 2021: How can RCB overtake CSK on points table & reach top 2
Listen to the latest songs, only on JioSaavn.com