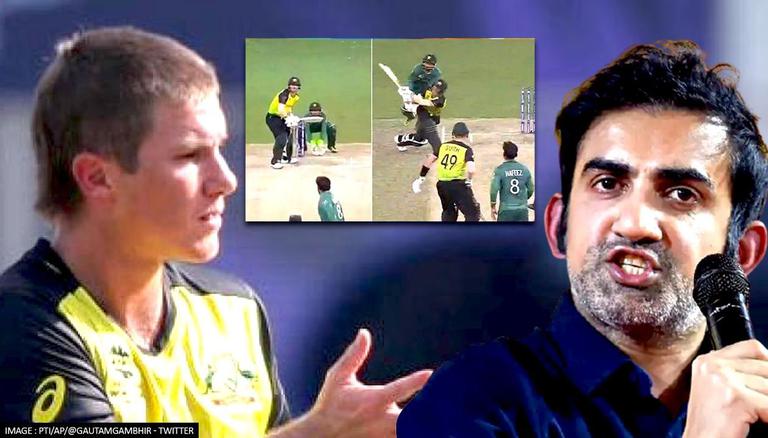 
Australian spinner Adam Zampa has hit back at former India cricketer Gautam Gambhir over the latter's take on David Warner's controversial six off Mohammad Hafeez's delivery in the semi-final match of the ICC T20 World Cup. Zampa, while speaking to ABC Grandstand podcast, said Warner had every right to hit the shot off a double-bounce delivery by Hafeez, which Gambhir and a few other experts had termed as against the 'spirit of the game'.

"It's an interesting take from Gautam Gambhir. I am not 100 percent sure if he would have hit it outside the circle but it's a pretty big effort for David Warner to hit it 110 metres and I think he had every right to," Zampa said on the podcast. Earlier, Gambhir had tweeted about the shot, calling it a "pathetic display of the spirit of the game" by Warner. Gambhir even tagged Indian spinner Ravichandran Ashwin in his post to take a jibe at those who criticised the latter for effecting the 'Mankad' in an IPL game back in 2019.

What an absolutely pathetic display of spirit of the game by Warner! #Shameful What say @ashwinravi99? pic.twitter.com/wVrssqOENW

The incident occurred in the eighth over of the second innings when Australia was attempting to chase down a big total posted by Pakistan. The delivery was bowled by veteran Pakistan all-rounder Mohammad Hafeez. The ball seemingly slipped from Hafeez's fingers and it bounced twice before an in-form David Warner ensured that he did not let this opportunity pass by as he advanced down the wicket and smashed it over the mid-wicket region for a massive six. Warner went on to score 49 runs in the game.

As far as the match is concerned, Australia beat Pakistan by five wickets to advance to the final of the competition. Batting first, Pakistan had posted a mammoth total of 176/4 in 20 overs courtesy of some brilliant display of batting by Mohammad Rizwan and Fakhar Zaman. In reply, the Kangaroos chased down the target in 19 overs. David Warner, Marcus Stoinis, and Matthew Wade played fantastic innings with the bat to help their side book a place in the final. Australia will now play New Zealand for its maiden T20I title on November 14.