Kohli had come to bat at his usual number three position after opener Shikhar Dhawan was dismissed by Mehidy Hasan in the sixth over of the first innings. 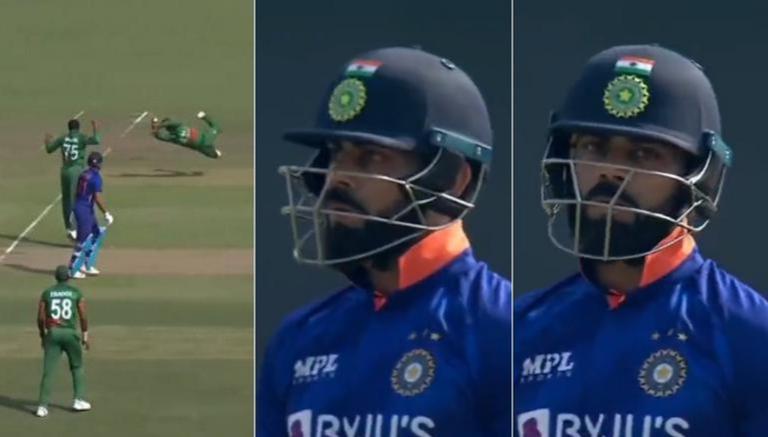 
Former India captain Virat Kohli on Sunday returned to playing competitive cricket after a short break following a stellar performance at the T20 World Cup 2022. Kohli is part of India's playing XI in the ongoing ODI match against Bangladesh. However, the 34-year-old's stay at the crease didn't last long as he was dismissed for just 9 runs by all-rounder Shakib Al Hasan. Litton Das took a spectacular catch at extra cover to send Kohli back to the pavilion. Even Kohli was left stunned by the effort shown by the Bangladesh captain.

Kohli had come to bat at his usual number three position after opener Shikhar Dhawan was dismissed by Mehidy Hasan in the sixth over of the first innings. After a couple of deliveries, Indian skipper Rohit Sharma was removed by Shakib for 27 off 31 balls. Shakib then dismissed Kohli in the same over with Litton Das taking a sensational catch to complete the wicket. Litton Das's flying catch left everyone stunned, including Kohli. Here's the moment when Litton Das took the impressive catch.

As far as the match is concerned, Bangladesh won the toss and elected to field first at Shere Bangla Stadium in Mirpur. Indian vice-captain KL Rahul top-scored for the side with his 73 off 70 balls. Shreyas Iyer also contributed to the total by scoring 24 off 39 balls. The visitors were dismissed for a low total of 186 runs. Shakib Al Hasan picked up a five-wicket haul, while Ebadot Hossain took four wickets.

Bangladesh are currently attempting to chase down the target. At the time of writing this copy, Bangladesh are 106/4 in 27 overs. They require 81 more runs to win from 23 overs. The Tigers are looking favourites to win the match and take a lead in the three-match series.