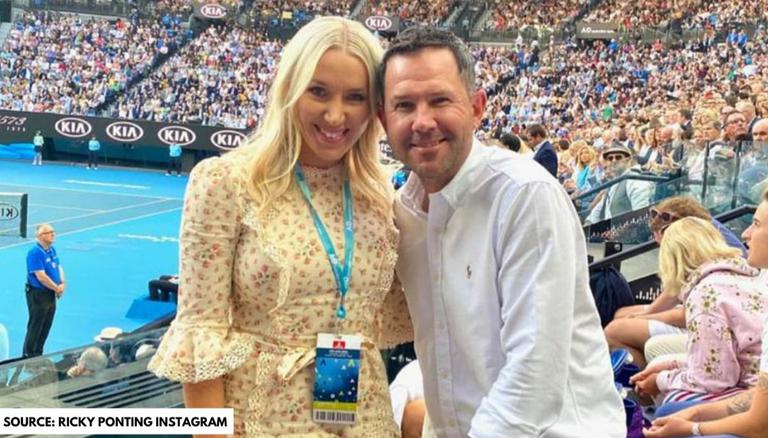 Former Australia captain Ricky Ponting's cricket career was an accolade-laden one. The champion batsman emerged to be one of the most prolific run-scorer for his national side and he is often hailed as one of the greatest ever to have played the game by many fans. Moreover, he has also led Australia to a number of memorable victories as their skipper which includes two World championships.

Ponting has taken up coaching duties post his retirement and has attained significant success as the head coach of the Delhi Capitals in the Indian Premier League. Apart from his glorious cricket career, many fans have also shown a keen interest in his personal life. 'Who is Ricky Ponting wife?' is one query fans have. Here we reveal more details about his adorable love story.

The swashbuckling batsman was known to be a feisty character on the field during his playing days. While he terrorized the opposition bowlers by taking them to the cleaners, he remains a die-heart romantic off the field. His love story with his wife Riana Jennifer Cantor has fascinated many fans as it showcases a different side of the aggressive cricketer. The two first met when Riana had come to watch a cricket match with her brother. Although in an ABC documentary back in 2013, Rianna claimed that she first saw Ponting at a bar alongwith Shane Warne.

Interestingly, Ponting was playing in the game and his family had also come to the stadium to watch him play. It was during the break that his eyes fell on Riana when he went to meet his family. The star player has admitted during numerous media interactions that it was love at first sight for him. Riana was still a student back then, and she was pursuing law. The champion cricketer went searching for her in her university as soon as the game ended. The two started seeing each other soon after the incident and ultimately tied the knot in June 2002. The couple now has three children together.

In fact, Rianna's popularity for marrying Ponting and her looks is so much that Andrew Flintoff admitted live on commentary in a Big Bash game that she is 'hot', prompting lot of laughter amongst his colleagues.

How much is the Ricky Ponting net worth figure?

From the Vault: The epic Andrew Flintoff-Ricky Ponting clash

The cricketer-turned-coach currently serves as the head coach of the Rishabh Pant-led Delhi Capitals side in the Indian Premier League. Ponting, in his tenure, has helped the side stage a significant turnaround. He was also at the helm of the side in the previous season, where they managed to make it to their maiden IPL final. The Delhi side was on the top of the table after having won 6 out of their 8 fixtures before the competition had to be suspended midway after multiple franchises reported a bio-bubble breach. The Ricky Ponting IPL 2021 stint came to an abrupt end with the sudden postponement of the season.

Disclaimer: The above information is sourced from various websites and media reports. The website does not guarantee a 100% accuracy of the figures.