Manchester United lost four of their previous seven games in all competitions, including a 5-0 thrashing they suffered at the hands of arch-rivals Liverpool. 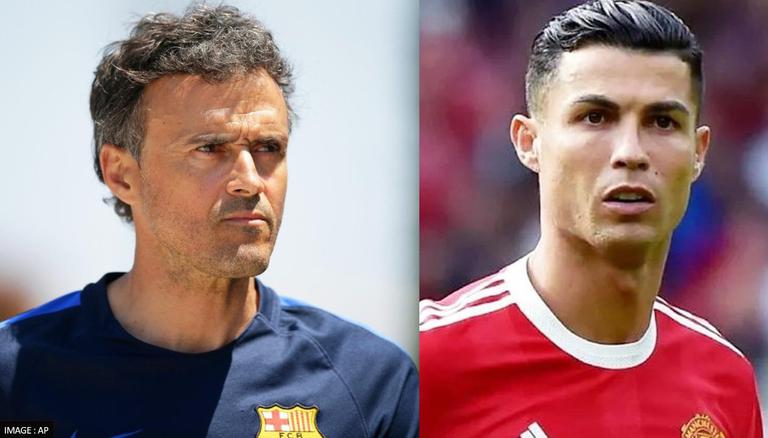 
Five-time Ballon d'Or winner Cristiano Ronaldo reportedly wants current Spanish coach Luis Enrique to take over the Manchester United job at Old Trafford. The Red Devils are looking for a full-time coach after sacking Ole Gunnar Solskjaer on November 21, as results seem to have deteriorated under the Norwegian manager.

Man Utd lost four of their previous seven games in all competitions, including a 5-0 thrashing they suffered at the hands of arch-rivals Liverpool on October 24. It remains to be seen if Enrique will leave the job with the Spanish national team, having taken over the coaching reigns in 2019.

According to Sky Sports News, Cristiano Ronaldo believes Luis Enrique is the right man to replace Ole Gunnar Solskjaer for the Manchester United job. The Portuguese captain believes that the Spaniard has the credentials to help get the Red Devils back to the top and compete with the likes of Manchester City, Liverpool and Chelsea, who seem to be in a league of their own this season. After 12 games, the Blues currently lead the Citizens by three points, with the Reds a further point behind in third.

Who else can replace Ole Gunnar Solskjaer?

Other than Luis Enrique, former Real Madrid manager Zinedine Zidane would perhaps be on the top of the list for Manchester United to replace outgoing coach Ole Gunnar Solskjaer. The Frenchman famously won three consecutive UEFA Champions Leagues with Los Blancos from 2015-16 to 2017-18 and also won La Liga in 2016-17 and 2019-20.

You signed me for the best club in the world and gave me the biggest honour in football. Huge respect and forever grateful.

Thankyou for everything boss.

The other coaches the Red Devils would consider are current Ajax boss Erik Ten Hag or Leicester City coach Brendan Rodgers. However, both these managers have spoken of their willingness to remain in their current roles, suggesting that Manchester United may need to look elsewhere. As for the Red Devils board, they are reportedly long-time admirers of former Tottenham Hotspur coach Mauricio Pochettino, who is currently managing Ligue 1 giants PSG.

"Manchester United announces that Ole Gunnar Solskjaer has left his role as manager.

Ole will always be a legend at Manchester United and it is with regret that we have reached this difficult decision. While the past few weeks have been disappointing, they should not obscure all the work he has done over the past three years to rebuild the foundations for long-term success.

Ole leaves with our sincerest thanks for his tireless efforts as Manager and our very best wishes for the future. His place in the club’s history will always be secure, not just for his story as a player, but as a great man and a Manager who gave us many great moments. He will forever be welcome back at Old Trafford as part of the Manchester United family.

Michael Carrick will now take charge of the team for forthcoming games, while the club looks to appoint an interim manager to the end of the season."