Brazil forward Neymar was fouled nine times by the Serbian players and got injured in the second half before being substituted in the 79th minute. 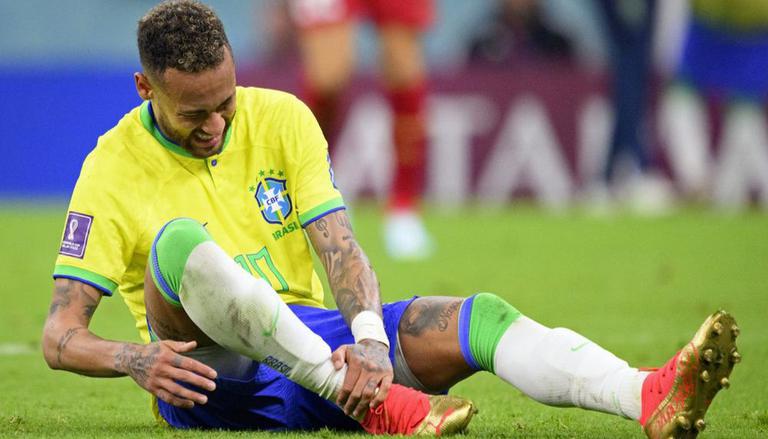 
The Brazil football team is one of the favourites to lift the FIFA World Cup 2022 in Qatar and they started their campaign with a 2-0 win against a very physical Serbia team. A brace from Richarlison saw Selecao pocket all three points and top Group G. While Richarlison marked a spectacular start to the FIFA World Cup 2022 campaign, superstar Neymar had a match to forget after limping off the stadium with a swollen ankle.

During Brazil vs Serbia match, Neymar was fouled nine times by the Serbian players and got injured in the second half before being substituted in the 79th minute. After being tackled hard a couple of times, the PSG striker was limping and grimacing with pain before having to leave the field. The 30-year-old was in tears on the bench when doctors began treating him in the final minutes of the match at Lusail Stadium.

Neymar's ankle was taped with ice around his foot after which he went into the locker room limping. Giving an update on Neymar's sprained ankle, Brazil team doctor Rodrigo Lasmar said “We put ice on it while he was on the bench and then in physiotherapy. There is no test scheduled for now but we will schedule it if needed. He will be under observation. We will know more tomorrow.”

The last time Neymar injured himself during the World Cup was during the 2014 edition of the tournament played at home. The striker suffered a back injury in the quarterfinals against Colombia and had to be taken off the field on a stretcher. The footballer did not play the semi-final as Brazil ended up losing to Germany 7-1.

Brazil coach Tite started with an attacking formation by playing four forwards in the form of Neymar, Vinícius Júnior, Raphinha and Richarlison. The Serbian defenders kept the Brazil attackers quiet by not allowing them to create many opportunities. Neymar was finding it difficult to free himself from the Serbian players who got physical with the PSG superstar. Vinícius Júnior and Raphinha all squandered chances early on in the match.

After a goalless first half, the deadlock was finally broken by Richarlison in the 62nd minute. Vinicius's powerful shot from the left was saved by Serbia goalkeeper Milinkovic Savic, but the Spurs striker hit the rebound right into the back of the net. Richarlison made the victory even more special with a stunning match-winning strike in the 73rd minute. After receiving the ball inside the box, he took one touch to bring the ball up, before scoring a fantastic bicycle kick volley. Following the second goal, Brazil comfortably saw off the match.