German players were seen covering their mouths in their first match against Japan to protest against the FIFA's ban on 'OneLove' armbands. 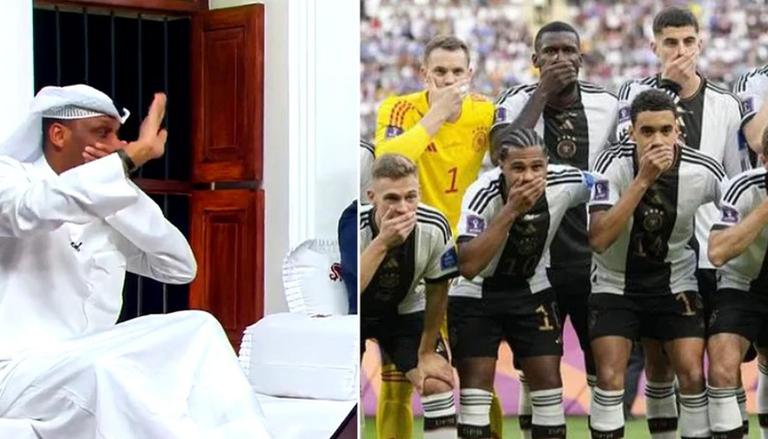 
The German national team suffered a shock exit from the group stage of the ongoing FIFA World Cup in Qatar despite their 4-2 triumph against Costa Rica on Friday. Earlier, Germany had lost their opening match of the tournament against Asian giants Japan, which hampered their chances of qualifying for the Round of 16. On Friday, when Japan beat Spain in their final group stage match, they spoiled Germany's hopes of qualification.

While reporting on Germany's exit from the ongoing World Cup, a Qatari TV channel brutally mocked the European side by covering their mouths and waving goodbye. It came in response to German players covering their mouths in their opening match against Japan to protest against the FIFA ban on 'One Love' armbands.

European teams were due to wear rainbow-themed armbands to show support for the LGBTQ+ community. However, a day before the tournament was slated to begin, FIFA imposed a ban on the armbands as homosexuality is illegal in Qatar.

German players were seen covering their mouths in their first match against Japan to protest against the FIFA ban. This angered a lot of people in Qatar, who saw this as an insult to their cultural beliefs. During Germany's second match of the World Cup against Spain, Qatari fans called out the European nation's hypocrisy by raising posters of former German player Mesut Ozil and covering their mouths. Notably, Ozil had accused the German FA of racism in 2018.

Germany managed to pick a 4-2 win over Costa Rica, but it wasn’t enough to take them through to the Round of 16 as Japan found themselves at the top of the points table with six points, while Spain finished second with a win, a draw, a loss, and four points to their credit.

While Germany also scored four points in their campaign, Spain went on to become the second team to qualify from Group E as they had a goal difference of 6, which was five more than that of the German side.