Saudi Arabia on Tuesday staged one of the biggest upsets in world football as they beat Lionel Messi-starrer Argentina in their FIFA World Cup opener. 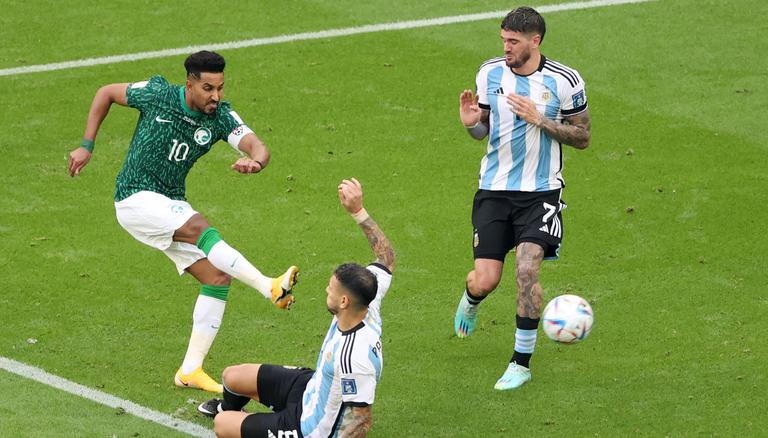 
Saudi Arabia on Tuesday staged one of the biggest upsets in world football as they beat Lionel Messi-starrer Argentina in their opening match of the FIFA World Cup 2022. Saudi Arabia defeated the former world champions 2-1 to move on top of the Group C points table. Messi scored the first goal of the game to provide Argentina with an early lead, however, the match turned upside down in the second half when the Saudis netted two back-to-back goals to seal the stunning victory.

Saleh Al-Shehri and Salem Al-Dawsari scored two goals for Saudi Arabia in the 48th and 53rd minutes of the match. Saudi Arabia has now become the first non-European team to beat Argentina at the World Cup since Cameroon in 1990. After the game, netizens flooded social media with memes and jokes celebrating Saudi Arabia's unbelievable victory over Argentina. Here's how football fans reacted after Saudi Arabia defeated Argentina in the Group C opener on Tuesday.

People who bet on Saudi to win. pic.twitter.com/QVof7EKyot

Messi scored the goal for Argentina in the 10th minute after his team was awarded a penalty following a foul on Paredes. Messi managed to send the ball into the back of the net as Saudi goalkeeper Al Owais dived the wrong way. Argentina scored three more goals inside halftime but all of them were overturned for offside. Saudi Arabia could manage to hit the ball on target in the first 45 minutes but they returned in the second half with the intent to score. Both their shots were on target in the second half, which helped them close the lead against Argentina.

Meme recap of all games from Day 3

Mexico and Poland from Group C also locked horns against each other in the other game on Tuesday. The match ended in a draw with both sides failing to score a goal, thus securing just one point each. The Group D match between Denmark and Tunisia also ended in a draw, despite 24 shots in the game. This is the most number of shots recorded in a goalless draw at the World Cup since Netherlands vs Costa Rica in 2014. Meanwhile, the Group B match between USA and Wales ended in a 1-1 draw. The USA took the lead by scoring in the 36th minute but an equalizer by Gareth Bale in the 82nd minute saw the match end in a draw. Here's a meme recap of all games from Tuesday.

Watching Poland miss a PK against Mexico while sitting in a Mexican restaurant in Poland is a surreal experience. 🇵🇱🇲🇽⚽️ #MEXPOL #FIFAWorldCup pic.twitter.com/WtrXzOcacN

Argentina fans praying for a draw between Poland and Mexico: pic.twitter.com/Eqvb2BKLy6

The Poland-Mexico match ends in a draw, the best result for Argentina 🙏🏼 pic.twitter.com/ZUb7jENYoV

The referee in the USA Vs Wales game pic.twitter.com/JJYzW2ga1s

Me watching Tunisia Denmark on a propped up phone on the table in the canteen pic.twitter.com/ZoGeg0RqKf

Me leaving work early to go watch second half of Denmark and Tunisia match! pic.twitter.com/96xtc9VGKK