T20 World Cup: A Look At Semi-final Qualification Scenarios For India Ahead Of NZ Vs AFG

New Zealand and Afghanistan are all set to lock horns in the 40th match of the ongoing ICC T20 World Cup, in what is also going to be their last group game. 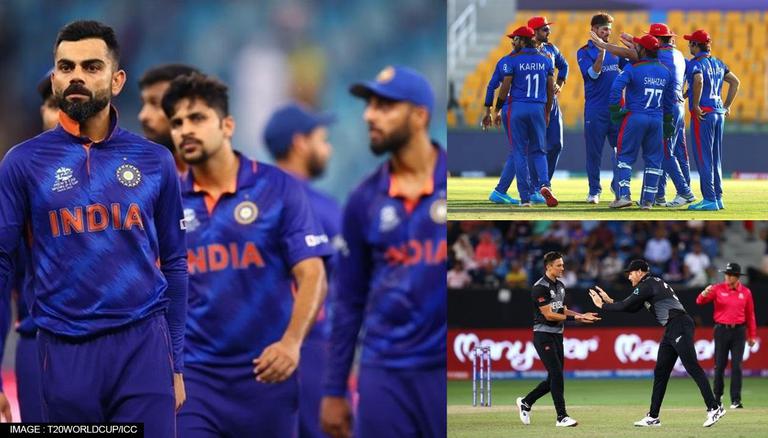 
New Zealand and Afghanistan are all set to lock horns in the 40th match of the ongoing ICC T20 World Cup, in what is also going to be their last group game of the competition. The match is slated to begin at 3:30 pm IST at Sheikh Zayed Stadium in Abu Dhabi on Sunday, November 7. Both New Zealand and Afghanistan will be eager to register a win in today's clash as it will decide their fate going forward in the tournament. The equation is pretty simple for the Kiwis as they will make it to the knockout stage if they win against Afghanistan, and if not, they will have to pack their bags and leave for India to prepare for their upcoming bilateral series.

However, the situation is more complex for Afghanistan and India. If Afghanistan is able to register a comprehensive win against New Zealand, they will have to wait for the result of the India versus Namibia game in order to confirm their qualification. Afghanistan will require India to either lose their clash against Namibia or win by the barest of margins. If that happens, Afghanistan will qualify for the semi-finals on the basis of a superior net run-rate (NRR) than India. In both scenarios, the success rate for Afghanistan is very less because it is very unlikely that Namibia will beat India and New Zealand will lose to Afghanistan by a big margin.

Meanwhile, if Afghanistan beat New Zealand in a close contest match, it will assure India a semi-final spot, assuming India will defeat Namibia in their final group game of the tournament. India have a better net run rate than all other teams in their group, courtesy of their 66-run win over Afghanistan and 8-wicket win over Scotland. However, the qualification chances for India are also very thin and New Zealand are favourites to advance to the next stage of the competition.

Pakistan is the only team in Group 2 that have comfortably secured its spot in the semi-finals with four wins in four games. England and Australia have qualified from Group 1. Pakistan and Australia will play their semi-final game against each other. If New Zealand wins against Afghanistan, it will play with England in the knockout stage. And if Afghanistan wins today's clash, either India or Afghanistan will meet England in the semis, depending on India's result against Namibia.