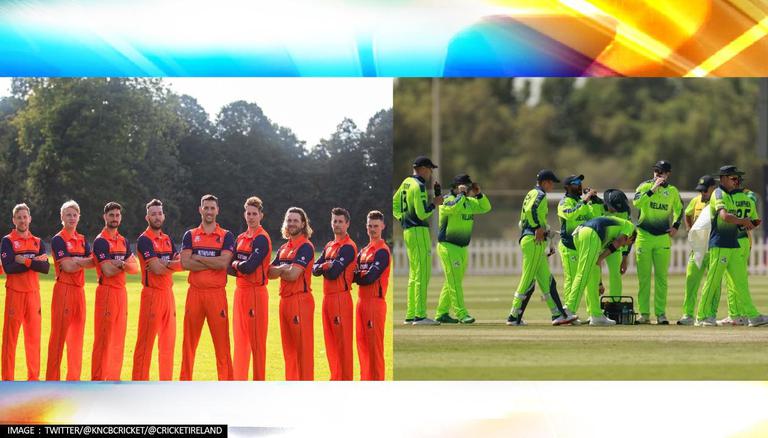 
A team that has a penchant for beating higher-ranked sides at major tournaments, Ireland will begin their T20 World Cup first-round campaign against a rising Netherlands, here on Monday.

The Group A match will be vital to the hopes of both the teams progressing to the Super 12 stage. The Netherlands have reasons to be confident, having won seven of their 12 T20Is against Ireland. They also come out on top in their recent ODI series.

Now firmly established as a force to be reckoned with, they can both make a statement and take a big step forward in the tournament. Ireland surprised many by reaching the second round of T20 World Cup in 2009 -- their debut tournament. They haven't made it further than the first round in their four tournaments since, missing out on net-run rate in 2014.

This time, they will be chasing their first win in a T20 World Cup tournament since 2014.

A mix of golden age mainstays and young talent, Ireland qualified for this year's tournament by topping their group in the qualifier on net run rate, even after dropping matches to Canada and UAE. Last playing a T20I back in March 2020 -- a three-match series they lost 1-2 -- Ireland have had mixed results in recent times, having first won the tri-series final against Scotland in a thrilling finish at home, and then going down to hosts Oman in the pentangular series to finish second in the competition.

The experienced Kevin O'Brien will be their key player, having also been in the team in 2009, playing a match-winning hand alongside brother Niall against Bangladesh with a stroke-filled 17-ball 39 not out. He then shot to fame in 2011, scoring the fastest-ever century in the 50-over World Cup to script an emphatic win against England in Bengaluru. He brought up Ireland's first-ever century in the shortest format, striking 124 off just 62 balls against Oman earlier this month.

READ | T20 World Cup: Bangladesh start as favourites to qualify for Super 12 from Group B

T20 World Cup: Can the Netherlands get off to a winning start?

Netherlands made the showpiece event by reaching the semi-finals of the T20 World Cup Qualifier tournament, which they went on to win. Netherlands have been at the heart of some of the most memorable moments in T20 World Cup history with brilliant one-off successes, including famous victories against England in 2009 at Lord's and 2014.

In the 2014 edition, they had beaten Ireland as they chased down a total of 190 in less than 14 overs to qualify for the second stage.With proven match-winners like Ryan Ten Doeschate, Ben Cooper, Roelof van der Merwe and Pieter Seelaar in their ranks, the Dutch will be hopeful of returning to the second stage of the T20 World Cup this month and then bettering their previous best tournament performance.

The calming presence of captain Pieter Seelaar will be key for the Dutch hopes of getting out of Round 1. A veteran of 15 years in international cricket, Seelaar has experienced the various highs and lows of Dutch cricket.