Alexis Olympia Ohanian Jr. could be earning just under £2000 pounds per post and £3000 per video uploaded on her Instagram page, which was made back in 2017.

Tennis legend Serena Williams has around 11.9 million followers on her Instagram handle, while her two-year-old daughter, Alexis Olympia Ohanian Jr already has 600,000 followers on her Insta page. Serena created her daughter's Instagram page over two years ago when Alexis was just a baby and during that period, she accumulated those many followers in an account which is being managed by Serena and her entrepreneur husband, Alexis Ohanian. 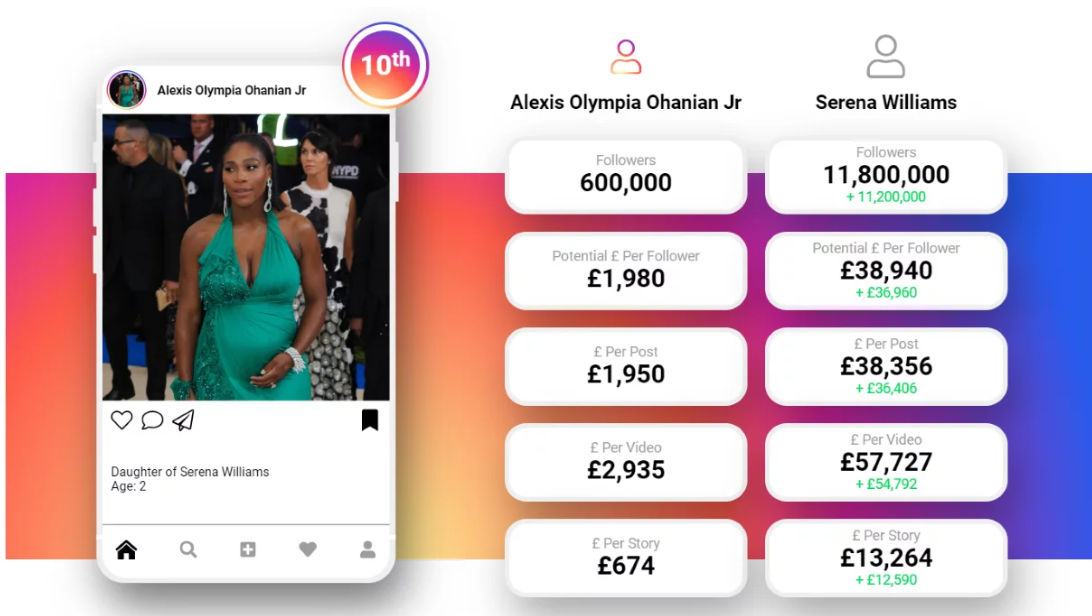 Serena Williams has 11.9 million followers on Instagram and she earns £38,356 per post on the social media site, £57,727 per video and £13,264 for every time she posts on her story. According to a new study, Alexis Olympia Ohanian Jr could be earning just under £2000 pounds per post and £3000 per video uploaded on her Instagram page. With such a massive fan following already, young Alexis could potentially earn more by posting one sponsored video than an average UK nurse would make in a month.

Bronny James, who is a 15-year-old high school basketball player, boasts an impressive 3.9 million Instagram followers. He’s still around 50 million followers behind his father, LeBron James, who plays in the NBA for Los Angeles Lakers. Bronny’s current social media following could earn him over £11,000 per post and £16,000 per video uploaded – meaning the high school student could earn more than the average salary earned by an employee in the UK in just two Instagram posts.

Also Read:  Serena Williams' Husband Alexis Ohanian Shared A Heartwarming Video To Motivate Her For The US Open

Mick Schumacher is a 20-year-old Formula 2 driver and the son of Michael Schumacher. He currently has over 189,000 followers and can earn £614 more per post than the most successful driver in the history of the sport. One sponsored post on his Instagram account would bag the young driver more than the average UK police officer makes in a month.