Google Celebrates Its 23rd Birthday With A Doodle On Homepage

The widely used search engine, Google, is celebrating its 23rd birthday today, on September 27, 2021. The company was found back in 1998 as a research project. 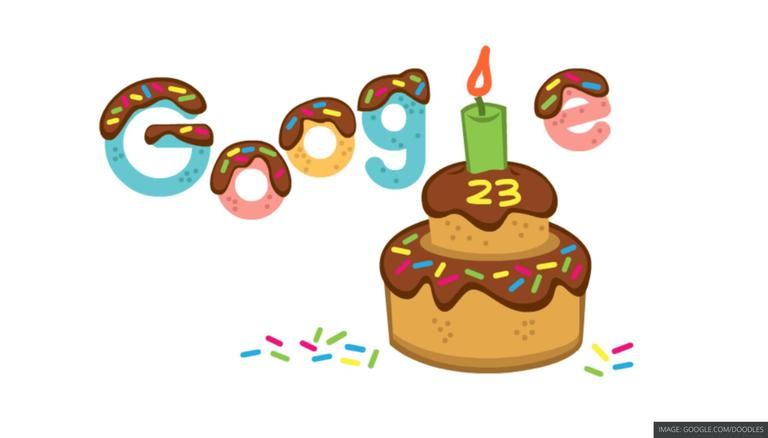 
Google is celebrating its 23rd birthday on September 27, 2021, i.e. on Monday. Like every other event that the search engine celebrates, Google has updated its doodle with the number 23 on a cake, along with some colourful toppings. The letters in the word Google are depicted through colourful party snacks with colourful toppings as well, and the 'L' in Google is substituted with a candle on the cake. While it is not seen to be moving at first, the Google birthday doodle is animated.

Google was found back in 1998, by Larry Page and Sergey Brin. The search engine was born as a research project by its founders who were doing research at Stanford University, California. However, very few people know that Page and Brin named their initial project Backrub. Later on, the search engine was named after the expression used to depict the number 1 followed by 100 zeros, signifying the founder's mission and vision to organise 'world's information and make it universally accessible and useful.'

Google Inc came into existence in 1998

It was only after funding from Silicon Valley investors that in 1998, Google Inc. was officially registered as a company. Google's first office was in a garage in Menlo Park, California, which surprisingly was owned by the current CEO of YouTube, Susan Wojcicki. In the early days, the office was equipped with big desktops, a bright blue carpet, and a ping pong table. Google's website even mentions that the tradition of keeping things colourful comes from here.

The first Google Doodle was made in the year 1998

The first Google doodle was made in the year 1998 itself. It was about a "stick figure in the logo announcing to site visitors that the entire staff was playing hooky at the Burning Man Festival", which was held in the Black Rock City in Nevada. Since then, the tradition of commemorating a significant event through a Google doodle has been going on. Most recently, users around the world have also seen interactive doodles from Google, including the one to celebrate Tokyo Olympics 2020.

Google was originally found on September 4, 2021

Google's 23rd birthday should technically be celebrated on September 4 every year, as that is the actual date when the company was found. However, it was after a few years when Google shifted the date to September 27 along with the announcement of an indexing record number of web pages. Currently, Sundar Pichai is the CEO of Google who took from Page on October 24, 2015. Additionally, the company went through a restructuring and announced Alphabet Inc as its parent company in 2015.