Google on Wednesday marked the 108th birthday of eminent Czech chemist Otto Wichterle, the man behind the spectacular invention of soft contact lenses. 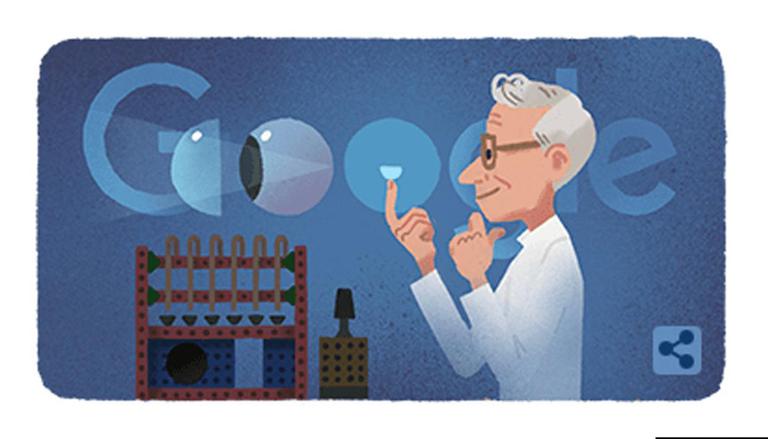 
Google on Wednesday marked the 108th birthday of eminent Czech chemist Otto Wichterle, the man behind the spectacular invention of soft contact lenses. Paying tribute to the scientist, Google dedicated a thoughtful Doodle to him. The detailed doodle celebrates the life and legacy of the chemist who made it easier for people to see without having to wear glasses.

The creative doodle shows an animated version of the scientist holding his invention on a fingertip. Additionally, the light reflected from the lens highlights the Google logo in the background. Not just that, the graphics designer has also included a much-needed chemist lab setting in the background with detailed apparatus set up and another device that seems to be a lamp.

Did you know that the modern contact lens 👁️ was invented by the #Czech 🇨🇿 chemist #OttoWichterle? By late 1961 he succeeded in producing the first four #hydrogel contact lenses on a homemade apparatus assembled out of a children's building kit (#Merkur). 👍 pic.twitter.com/hH3HngIKiJ

Creator of modern soft contact lenses, Otto Wichterle was born in 1913 in Prostejov, Austria-Hungary (now the Czech Republic). He attained a doctorate in organic chemistry from the Prague Institute of Chemical Technology (PICT) in the year 1936. He was also elected as the first President of the Academy of Czech Republic after the establishment of the country in 1993.

"While Wichterle is most well-known as the inventor of contact lenses, his innovations also laid the foundation for state-of-the-art medical technologies such as “smart” biomaterials, which are used to restore human connective tissues, and bio-recognizable polymers, which have inspired a new standard for drug administration," Google India said in a statement.

According to the Contact Lens Museum, Wichterle successfully developed the first four hydrogel contact lense on a homemade apparatus built using a children's building kit Merkur (an apparatus similar to the American Erector set), a bicycle dynamo owned by his son and a bell transformer. Being a scientist, "all the molds and glass tubing needed to dose them with monomer were also individually made by himself," the Contact Lens Museum mentioned. Wichterle patented his creation in the year 1965 with Nation Patent Development Corporation (NPDC) and brought the American rights to produce lenses and sublicensed it to Bausch and Lomb. Today nearly 140 million people use the version of the contact lens created by Wichterle for better eyesight.