Astronomers found that the galaxy had already diminished emitted close to 46 per cent of the total cold gas that is used as a fuel to carry out star formation.

Astronomers have observed a rare phenomenon in the space as they have witnessed a dying galaxy. The distant galaxy released almost half of the gas that it uses for star formation that might have responsible for a collision with another galaxy. An international team of astronomers from Durham University lead research in which they analysed nine billion years from several years past in order to search for evidence that galaxy mergers in the early universe could stop star formation and die out eventually. The rare observation was recorded by the astronomers using the Atacama Large Millimeter or submillimeter Array of telescopes in Chile.

According to the study published in the journal Nature Astronomy, the light from this dying galaxy, known as ID2299, took an estimated nine billion years to reach Earth. Astronomers found that the galaxy had already diminished emitted close to 46 per cent of the total cold gas that is used to carry out star formation. "This is the first time we have observed a typical massive star-forming galaxy in the distant Universe about to 'die' because of a massive cold gas ejection," said Annagrazia Puglisi, lead study researcher and postdoctoral research associate from Durham University in the UK and the Saclay Nuclear Research Centre in France said in a statement. "Our study suggests that gas ejections can be produced by mergers and that winds and tidal tails can appear very similar," said the study's co-author and astronomer at the Saclay Nuclear Research Centre in France, Emanuele Daddi. "This might lead us to revise our understanding of how galaxies 'die'," he added. 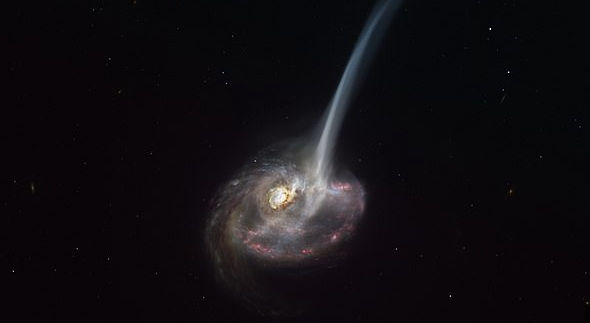 [Artist's impression of ID2299 shows the galaxy, the product of a galactic collision, and some of its gas being ejected by a "tidal tail" as a result of the merger. Credit: ESO] 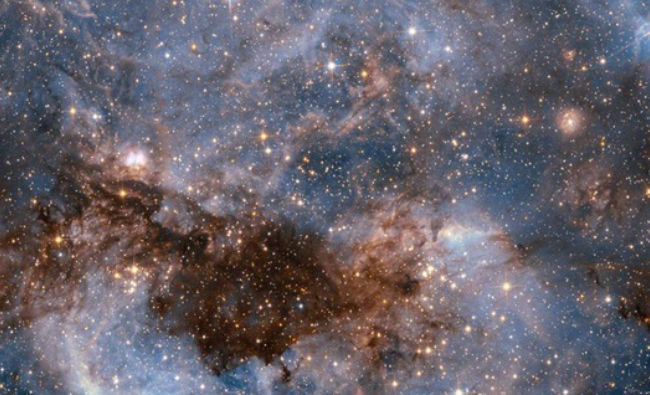 [Gas glows white, lit by a stellar nursery, in this view of a region within the Large Magellanic Cloud, the Milky Way’s largest satellite galaxy. Most cosmic gas is not so visible and lies outside of galaxies. Credit: ESA/Hubble & NASA]

"ALMA has shed new light on the mechanisms that can halt the formation of stars in distant galaxies. Witnessing such a massive disruption event adds an important piece to the complex puzzle of galaxy evolution," said Chiara Circosta, study coauthor and researcher.

According to the research, the phenomenon was caused after the diminishing galaxy's collision with another galaxy that created a separate galaxy known as ID2299 without the tidal tail. Despite the fact that the galaxy's bright tails were usually invisible, astronomers were able to observe that this new galaxy lacked the tidal tail due to the collision. The merger led to a large amount of star formation in the nuclear regions of the newly merged galaxy dubbed ID2299 which led to one of the galaxies to starve, thus depleting the fuel needed for new stars to form. For at least several hundred million years, the galaxy will be unable to produce stars, which will eventually shred out the celestial entity and hamper its development. 'We don't yet know what the exact processes are behind the switching off of star formation in massive galaxies," lead author at the Durham University's Centre for Extragalactic Astronomy Annagrazia Puglisi said.