Crab Fossil Preserved In Amber Dating Back To 100-million-years, Found In Myanmar

Discovered in Myanmar, the fossil is preserved at the Longyin Amber Museum in China's Yunnan and is the most complete crab fossil discovered to date. 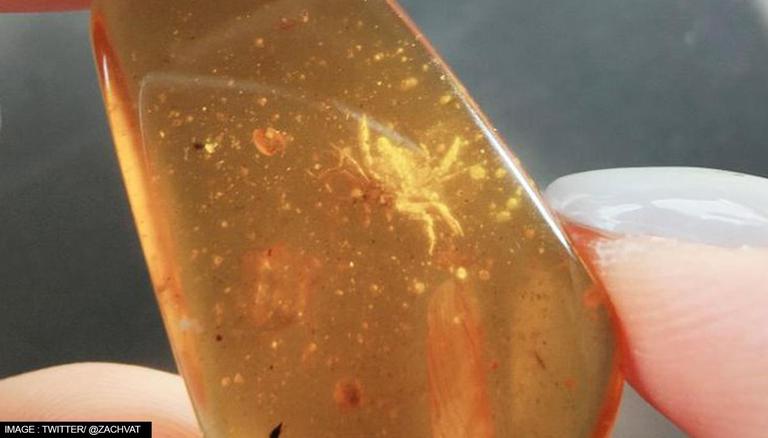 
Paleontologists have recently identified a fossil of a crab preserved in amber to be nearly 100-million-years-old. After being discovered in Myanmar, the fossil is preserved at the Longyin Amber Museum in China's Yunnan and is the most complete crab fossil discovered to date. This fossil of a crab is being given extra importance as ambers are generally known to trap remains of organisms living on land and primarily on tree trunks.

Crab fossil dates back to the Dinosaur era

What is the most intriguing factor about the fossil is that the crab, dating millions of years old, shared the planet with dinosaurs. Published in the Journal Science Advances, this new study has named the found crab species Cretapsara athanata, which means “the immortal Cretaceous spirit of clouds and water".

Talking about the discovery, lead author of the study and researcher at Harvard's Department of Organismic and Evolutionary Biology, Javier Luque said that this crab specimen is not missing a single hair and is the most complete crab fossil ever discovered in history. Since the amber is in possession now, experts hope that the crab will provide evidence about its behavior and the environment in which it once lived.

How did the crab end on land?

Upon performing Micro CT scans on the crab, the experts noted that this specimen has just 5-millimeter-long legs but weren't able to conclude if it is a baby, juvenile or adult crab. However, the scans revealed that the C. athanata species lack lung tissue and well-developed gills which explains its existence on land and how it got trapped in the amber. In addition to this, Luque explained that during the dinosaur era, the Cretaceous period to be specific, trees that could produce amber used to be evergreen and so the crab must have inhabited an evergreen forest, reported Gizmodo.

Luque suggested another possibility citing the Christmas Island red crabs, which are known to release their babies into the ocean, and then swim back to the land.

With the new evidence, the scientists are reportedly hoping to determine the origin of freshwater crabs, their behaviours and most importantly, the era when they first emerged. Till now, existing documents show that Brachyura crabs, also known as True Crabs emerged 200 million years ago while the marine and non-marine crabs split around 130 million years ago.