The space observatory, which is a joint collaboration of NASA, will now be driven to its launch site, Europe’s Spaceport in Kourou, before its launch. 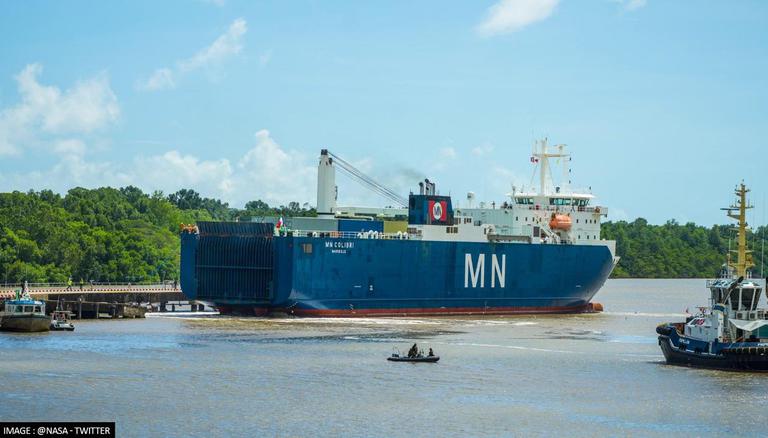 
NASA’s much anticipated James Webb telescope has been successfully shipped from California through the Panama Canal to Port de Pariacabo on the Kourou River in French Guiana, informed NASA on October 12. The space observatory, which is a joint collaboration of NASA, will now be driven to its launch site, Europe’s Spaceport in Kourou, where it will begin two months of operational preparations, said NASA. The telescope underwent its final journey ahead of launch this year on December 18.

✅ Closer to launch! The @NASAWebb Space Telescope has arrived in French Guiana for its scheduled Dec. 18 liftoff.

From California, through the Panama Canal, to South America – get the details on Webb's 1,500 mile (2,400 kilometer) voyage: https://t.co/bocg5x0qEg pic.twitter.com/RWpUFUdt2P

In the latest press release by NASA, the agency revealed the telescope underwent the final leg of its cross-country ventures, which first began after it was assembled. The telescope was assembled in 2013 at NASA's Maryland-based Goddard Space Flight Center and four years later i.e. in 2017 it was shipped to NASA's Johnson Space Center in Houston for cryogenic testing at the historic “Chamber A” test facility. It was again shifted the next year to California’s Space Park for rigorous testing as scientists wanted to ensure its readiness for space missions.

According to the release, NASA administrator Bill Nelson said, “The James Webb Space Telescope is a colossal achievement, built to transform our view of the universe and deliver amazing science”. He further added that NASA is extremely close to unlocking more mysteries of the universe as the telescope will take humanity back to 13 billion years, when the big bang happened and the universe was born.

Detailing about Webb’s launch preparations, NASA stated that engineers will run final checks on its condition after it is removed from the container it was shipped in. The scientists will then configure the telescope for launch by loading it with propellants before loading it up aboard the Ariane 5 rocket.

However, the upcoming launch of Webb has also met with some controversies as several astronomers including scholars had filed a petition for renaming the telescope from the current name which is a tribute to former NASA administrator James Webb. The petitioners had alleged that James Webb was explicitly biased towards gay and lesbians including the staff members of NASA at the time. Although, the agency confirmed that it will not rename the telescope despite the petitions.

READ | NASA will not rename James Webb Telescope despite petitions