Chasing yet another scientific breakthrough, scientists at Purdue University, Indiana have recently created the world's fastest spinning object, according to a press release by the University. The scientists have achieved to make a nanoparticle revolve at 300 billion revolutions per minute (rpm), powered only by force and torque of light. This silica nanoparticle can serve as the world's most sensitive torque detector, according to researchers and will help to measure the friction created by quantum effects.

How did they create the fastest 'nano-rotor'?

According to the study published in Nature Nanotechnology, the researchers levitated the object in a vacuum using light in the form of a laser. Then, using a second laser with a polarizing plate to alternate the optical torque on the object in the researchers tested its torque detection sensitivity. This created a world record with the world's fastest-spinning human-made object. 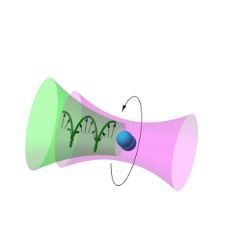 Previously in 2018, the same team headed by Assistant Prof. in Physics and Astronomy Tongcang Li had set the previous world record for the fastest-spinning object with a similar device that was one-fifth as fast. The nano dumb- bell levitated by an optical tweezer in vacuum can move at a whopping speed of 60 billion revolutions per minute, according to reports. That speed was approximately 100,000 times faster than a high-speed dental drill, while the current rotor is half a million times faster than a dentist's drill.

Scientists state that while one may not be able to feel it physically, it produces light radiation pressure which is a force million of times weaker than gravity. This force reportedly can power satellites using light sails. The new nano rotor can measure torque at levels 600–700 times more sensitive than any device before, state scientists. The nano-torque detector could also be used to measure related effects, including the Casimir effect and nanoscale magnetism, which could eventually allow engineers to develop and control nanoelectronic devices.