Amid the festivities of Diwali, Facebook India posted a heart-warming video which touches upon the serious issue of job losses amid coronavirus pandemic

Amid the festivities of Diwali, Facebook India posted a heart-wrenching video which touches upon the serious issue of job losses amid coronavirus pandemic while highlighting the power of social media in such situations. The seven-minute-long  short film follows the journey of Pooja, a young girl who is the sole proprietor of Pooja Milk Centre in the city of Amritsar. As the wrath of coronavirus grows many people around start losing their jobs.

After reading about them in the newspaper, she decides to hire them all. She then posts an advertisement on Facebook, saying anyone who lost their job amid the pandemic should contact her.  Soon, workers - electricians, plumbers, carpenters, deliverymen – assemble at her small milk centre. Despite facing opposition from her brother, Pooja hires all of them, teaching them the skills necessary to run a milk centre.

Pooja and her brother try every means to keep the business thriving despite struggling to pay the salaries. However, Pooja is firm on keeping all the workers and says ‘Inki bhi tho Diwali hai‘ after her brother suggests that they would have to layoff a few of them.

One of the workers overhears the conversation. He then, along with others posts a video on Facebook saying that it was Pooja Milk Centre, which hired them when nobody was, while asking people to support them. An outpouring of goodwill follows - one that will have viewers reaching for the tissues as this moving short film ends.

Directed by National award-winning director Amit Sharma, the clip has left netizens fighting back tears. Titled 'Pooja Didi', the clip has been viewed over 26 million times while the comments section has been filled with plaudits for the film and the concept. "Really, nice video , really inspiring for beginners like us. all of us are learning new skills.. trying to be newer versions of ourselves." wrote a user.  "what a brilliant script, what an awesome ad. Hats off to the whole team," added another. "Beautiful and Emotional Video..Hats Off To the Team," wrote a third user.

Read: Four Best Alternatives To Facebook For You: Choose Your Favorite Here! 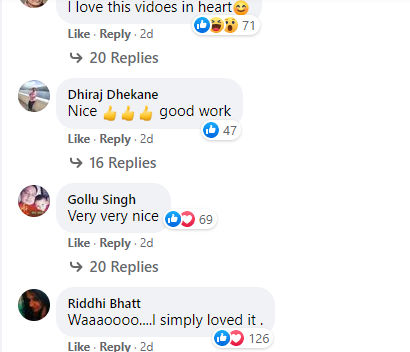 Read: Facebook Extends Ban On US Post-election Political Ads Amid Surge In Misinformation