43-year-old Congo Prime Minister appointed by Tshisekedi is a former sports minister and an ex-party member of the former governor of Katanga Moïse Katumbi.

Congo President Felix Tshisekedi on February 15 appointed  Jean-Michel Sama Lukonde Kyenge, director-general of Gécamines (General Quarries and Mines) as the new DRC Prime Minister. The 43-year-old, who was appointed to Gécamines by Tshisekedi, is a former sports minister and an ex-party member of the former governor of Katanga Moïse Katumbi, who recently postured his political lean in support of the President. Lukonde's appointment comes after long political feuds and a struggle to gain control of power by Tshisekedi over the opposition party’s allies. According to sources of Africa’s press, the leader of the sub-Saharan African country has long been vying to have a considerable influence since Congo’s first-ever transition of power to Tshisekedi in 2019, January, following several years of turbulent politics.

"I wish him every success in his duties, among which peace and security for all Congolese remain the major challenge of government action,” former governor Katumbi wrote on Twitter, welcoming the appointment of the new Prime Minister.

Naming Lukonde as his prime minister, is a move for Tshisekedi to make parliament more favourable towards his leadership after he dissolved the two-year power-sharing coalition with ex-President Joseph Kabila's faction in December last year. “I have decided to appoint an informer to identify a new parliamentary majority as the current one has collapsed,” Tshisekedi said in a press briefing to the nation. 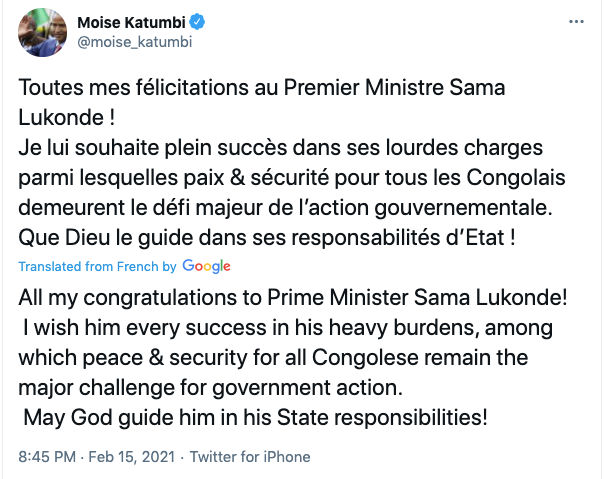 Alleging that coalition with former President Kabila who handed him power in 2018 “did not allow” him to perform duties he was elected for, Tshisekedi scrapped coalition with partner Common Front for Congo(FCC) in the Democratic Republic of Congo's government despite the accusation of ‘intentional constitutional breach’. Reports suggest, that the DR Congo president was elected to power after he struck a secret coalition agreement with his predecessor Kabila, who held a majority in the parliament.

Due to weak leadership with more ex-president, Kabila loyal ministers in a coalition between his party Heading for Change (CACH) and the pro-Kabila Common Front for the Congo (FCC) alliance, Congo’s President dissolved the National Assembly. Further, he made threats of re-election after chaos ensued in the parliament against his political move. The administrative crisis in Congo worsened with Tshisekedi appointing new judges to the Constitutional Court, and new designations in the country's armed forces. With the end of the alliance between him and former president Joseph Kabila, for once and all, the DR Congo President began nominating a self-loyal cabinet in order to strengthen his power by forming a new majority in parliament.