At least seven were killed in a military plane crash on Sunday morning in Abuja, Nigeria's capital, the Nigerian Air Force (NAF) confirmed. The aircraft, which was returning to the Nigerian capital, incurred engine malfunction, Spokesman for the NAF, Air Vice Marshal (AVM) Ibikunle Daramola confirmed on his official Twitter handle, announcing the casualties. Chief of the Air Staff (CAS) Air Marshal Isiaka Amao has ordered a probe into the incident.

“This is to confirm that a Nigerian Air Force (NAF) Beechcraft KingAir B350i aircraft crashed while returning to the Abuja Airport after reporting engine failure en route Minna,” Amao wrote on his Twitter handle. He added, “First responders are at the scene. Sadly, all seven personnel on board died in the crash. The Chief of the Air Staff (CAS), Air Marshal Amao has ordered an immediate investigation into the incident.” Further, the CAS Air Marshal asked people to remain calm and wait for the outcome of the probe to determine the cause of the crash. 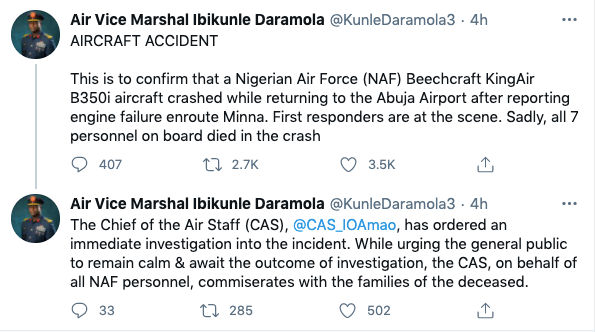 Furthermore, AS Air Marshal Amao expressed condolences on behalf of “all NAF personnel” and commiserated with the families of the deceased. Nigerian Air Force (NAF) Beechcraft KingAir B350i aircraft en route Minna crashed while on the runway of Abuja airport, early morning, claiming all 7 lives onboard. First responders are at the scene, Air Vice Marshall Ibikunle Daramola disclosed, on Twitter. The country's Minister of Aviation Hadi Sirika, meanwhile, also confirmed the tragedy, saying that the Nigerian military personnel were ordered to cordoned off the area, and prohibited the site to the public for inspection.

In a follow-up to the report, Nigeria’s Minister of Aviation, James Odaudu, said "aircraft reported engine failure at time 10:39 and crashed landed on the final approach path of Abuja Runway 22 at time 10:48UTC.” Furthermore, he informed the local agencies that the firefighters were deployed on the scene to douse flames that had trashed the aircraft, completely. In his statement to CNN, an aviation employee, who had witnessed the crash, said that the pilot had attempted to revert the aircraft to the runway a few minutes into the takeoff, after which, it crashed.

Read: In Terrifying Incident, US Plane's Engine Burns Mid-air And Rains Debris From The Skies