Under Gaza’a Sharia Judicial Council, a judge ruled that unmarried women were prohibited to travel unless permitted by a father or older male relative.

In a controversial travel regulation, a Hamas Islamic court in Gaza on Tuesday stated that women require male’s permission to travel and any movement in and out of the territory would be deemed ‘illegal’ without a guardian’s approval. Under the Hamas de facto government in Gaza strip, women rights are ‘severely violated’ and the civil liberties have declined, according to Euro-Med monitor, as both Palestinian Authority (PA) and Hamas have exercised oppressive regime in the West Bank under its Islamist gender ideology. In Tuesday’s verdict, under Gaza’a Sharia Judicial Council, a judge ruled that the unmarried women were prohibited to travel unless permitted by a father or older male relative.

The permission, according to Mideast press, was mandated to be registered with the court. A married woman, meanwhile, according to sources of Associated Press, was asked to seek permission to travel from her husband. Furthermore, the court ruled that any man is restricted to go on a journey in case of objection from the father or grandfather if the trip involved any suspected “grave harm.”

'Disgusted that the Hamas authority in Gaza have passed a law stipulating that unmarried women cannot travel without the authorisation of a male guardian,' fumed human rights activist Gary Spedding working with Palestinian issues in the region. He further called on relevant authorities to immediately recall the Bill and ensure appropriate pressure is applied to undo this misogynistic law. 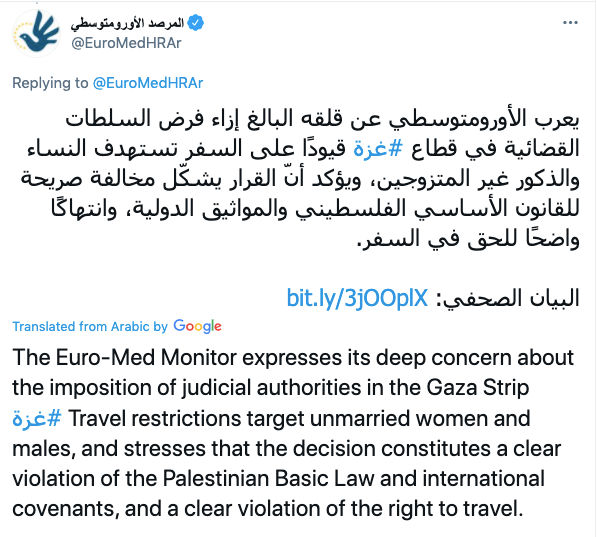 Read: Tarnished By Its Gaza Rule, Hamas May Struggle In Elections

The ruling, that can cause a backlash, comes ahead of the  Palestinian elections in Gaza Strip as Hamas seeks to gain popular support in midst of accusations of deteriorating infrastructure and living conditions during the COVID-19 in the conflict-ridden region. A Hamas run court document, accessed by Associated Press, stated that women were required to ask a guardian or a male relative to file a lawsuit in the court of law prior to travelling. Experts saw a stark similarity between Gaza’s guardianship law with rules for women in conservative Saudi Arabia, where women, even when married, were treated as minors and law mandated them to seek permission for travel from the male of the house. Saudi Arabia, however, scrapped the law in 2019, allowing women to apply for a passport and travel freely without male permission.

"The recent judicial circular's provisions contradict the principles of the law and the guaranteed right of people to travel. The Palestinian Basic Law guarantees the right of citizens to move and travel, as Article 11 stipulates that “Personal freedom is a natural right, shall be guaranteed and may not be violated," the Euro-Mediterranean Human Rights Monitor said in a statement.

Prosecutor of the Gaza’s Supreme Judicial Council, in a statement to AP, said that the Tuesday’s ruling was “balanced and consistent with Islamic and civil laws.” He dismissed concerns about women’s rights and violation of freedom as  “artificial and unjustified noise”.  In the aftermath of protests against the law passed by Gaza’s Sharia Council, however, Judge Hassan Jojo recently agreed to review the controversial ruling that could strip nearly 2 millions off their freedom, according to Hareetz. Palestine’s Independent Commission for Human Rights (ICHR), meanwhile, objected to the law, stating that the ruling was discriminatory with respect to race, gender, colour, religion, political opinion or disability.