Daughter posted her father's picture laying on the lawn at night for five minutes while her brother keeps watching on the bushfires in their area in Australia.

Amid huge destruction of life and infrastructure in Australia, netizens have shown their respect towards the 'tireless' firefighters who are taking the heat-wave on the front line while ensuring safety of others.

A Facebook post showing a tired firefighter after long hours at work went viral with netizens sympathising with the daughter of the firefighter and called him a 'hero' who worked for more than 12 hours for the tenth day in a row. Jenna O'Keeffe posted her father's picture laying on the lawn at night for five minutes while her brother keeps watching on the fire.

Netizens feel proud about the firefighters in Australia and denote them as heroes. The post by Jenna has already received more than eight thousand comments and an overwhelming 74 thousand reactions.

One of the Facebook users also said that he has 'nothing but admiration' for people like Jenna's father. The firefighters had also previously received a shoutout from the New South Wales Rural Fire Service department who were 'proud' of their workers missing holiday season towards the end of the year and working tirelessly.

Internet users also prayed for families like Jenna's to have strength as their beloved members fight the angry fires. Facebook user said, “Lord, watch over all the Firefighters who bravely work to keep these Australian families safe!! All things are possible for you”. Another user said, “As an Australian, I am so brokenhearted to watch my beautiful beloved country burn burn burn ..... while also so proud of the Firefighters; volunteer or otherwise”. 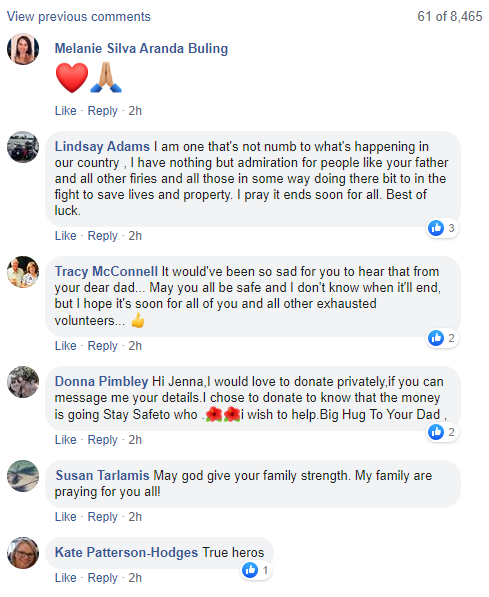 Jenna further elaborated the post on social media on January 4 about how her family has been fighting the bushfires in their farm area and their community. The 'tired, sore' firefighters are 'running out of resources' and Jenna's dad even cried in front of her about 'never seeing anything like this'.

More than 135 bushfires are still burning across the state, including almost 70 that were uncontained. The post not only embarks the importance of firefighters who are voluntarily fighting the situation 'first-hand', but also helped netizens realise what their families feel.