In Ontario, Canada, which is the most populated province of the country and home to more than 3 lakh Hindus, Hindu Heritage Month has begun. 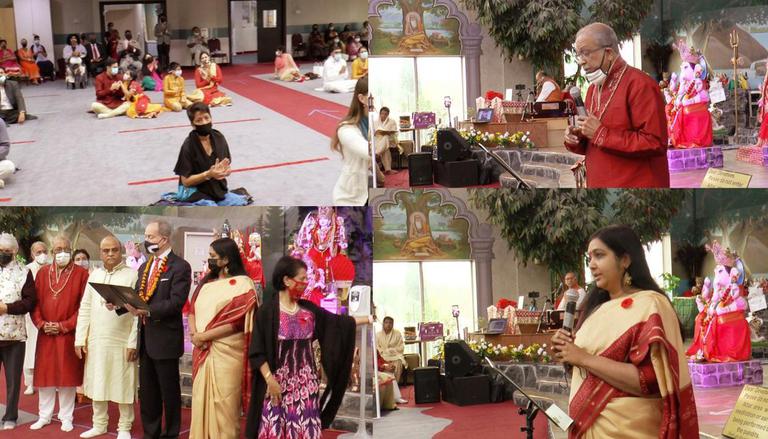 
In Ontario, Canada, which is the most populated province of the country and home to more than 3 lakh Hindus, Hindu Heritage Month has begun which is celebrated in the month of November. To commemorate Hindu Heritage Month, Devi Mandir in Pickering hosted a ceremony and has placed enormous billboards around the Greater Toronto Area.

One of the attendees said that as Devi Mandir and Hindu Forum Canada, which is an NGO join forces to commemorate Hindu Heritage Month, this is a very pleasant and auspicious day. This month was designated as Hindu Heritage Month in December 2016. The attendee further said that in the Toronto district, the school board of trustees decided to dedicate this month to the sound of the cosmos, Om.

Apoorva Srivastava, India's Consul General in Toronto, opened the gathering and wished everyone in the community a happy Diwali. Peter Bethlenfalvy, Ontario's Minister of Finance, delivered the Premier's message to Hindu Forum Canada. He stated that Hindu Canadians have played a significant role in the country's efforts to get back on track, and that multicultural groups and organisations have played a more effective role in combating the deadly COVID-19.

I was happy to attend the celebration at Devi Mandir and present greetings on behalf of Premier FordNation.

Hindu Ontarian’s have been vital contributors to our provinces prosperity and economic recovery! pic.twitter.com/NPf0NiCrW5

The ceremony was attended by around 200 members of the community. Over two hours of "Bhajans" and ethnic dances were performed while coronavirus guidelines were followed. Local police officers, Members of the Provincial Parliament (MPPs), the Deputy Mayor, and other officials, as well as local Gurdwara Sikh leaders, attended the ceremony. Gurudwaras hosted the meal as part of the Hindu Heritage Month events.

The US proclaimed October as Hindu Heritage Month

In the meanwhile, according to community leaders, the US has proclaimed October as the Hindu Heritage Month in the country, with proclamations issued by more than 20 of the 50 states and more than 40 cities. Elected officials issued the notifications to recognise the contributions of this minority population in the United States. Texas, Ohio, New Jersey, Massachusetts, Georgia, Florida, Minnesota, Virginia, Nevada, Mississippi, Delaware, North Carolina, Pennsylvania, Maryland, New Hampshire, Connecticut, Wisconsin, Missouri, Indiana and Michigan are among the states to recognise October as Hindu Heritage Month.