As the deadly coronavirus has now spread to over 90 countries, Netherlands has now confirmed its first death of COVID-19 on March 6 with 82 confirmed cases.

As the deadly Coronavirus has now spread to over 90 countries, Netherlands has now confirmed its first death of COVID-19 on March 6. The 86-year-old man was admitted to the Ikazia Hospital in Rotterdam and was also the first patient of the fatal virus in the country. He was in isolation like 82 other confirmed patients in the country.

First detected in the city of Wuhan, in Hubei Province of China, the virus outbreak has now spread across more than 90 countries since December 2019. As per reports, the total number of confirmed cases within China has reportedly hit over 80,000 and more than 98,000 worldwide.

According to reports, the death toll in China has also surpassed 3,000 and the National Health Commission also confirmed more than 100 new cases. The death toll due to the deadly virus across the world also mounted to 3,390. 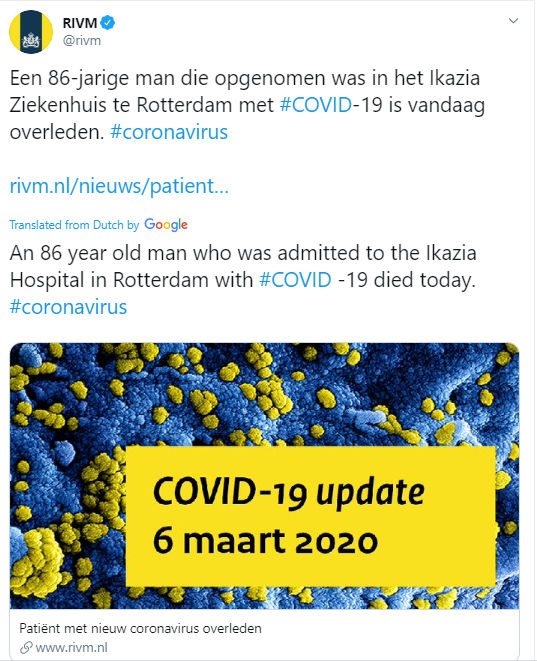 'Not be too eager to declare pandemic'

Since the fatal virus has now affected every continent except Antarctica, the WHO director-general, Tedros Adhanom Ghebreyesus had said earlier that the officials “should not be too eager to declare a pandemic” in the absence of “clear-minded analysis of the facts”.

However, the UN health agency has still declared its highest level of alarm which is a public health emergency of international concern. Using the word 'pandemic' could give a signal that the coronavirus can no longer be contained, but Ghebreyesus said that it “is not true”.

According to the official website, Ghebreyesus explained, “Using the word pandemic carelessly has no tangible benefit, but it does have a significant risk in terms of amplifying unnecessary and unjustified fear and stigma, and paralyzing systems”.

However, he later added that the organisation will not “hesitate” in declaring the outbreak a pandemic if “it is an accurate description of the situation”.

Meanwhile, the European Union office in Brussels has reported its first positive case of COVID-19. A spokesperson reportedly confirmed that an employee at the European Defence Agency was tested positive on February 29.